Romney cedes the top spot in speaking time at a debate for the first time since the September 12th gathering in Tampa, Florida 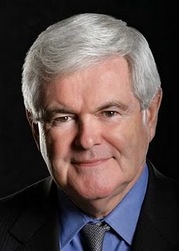 With the release of national surveys over the last week by four polling organizations that show Newt Gingrich leading the Republican presidential field (CNN, Quinnipiac, USA Today/Gallup and FOX), CNN took its cue and shined a spotlight on the former House Speaker with a wattage that he had not yet received in any of the previous debates.

While Gingrich was still denied one of the two center stage slots in D.C. Tuesday evening – reserved for Mitt Romney and Herman Cain – he nonetheless was a focal point of the questions posed and directed by moderator Wolf Blitzer.

A Smart Politics content analysis of the Constitution Hall debate finds that, for the first time this debate season, Newt Gingrich notched the most speaking time on the GOP stage.

Gingrich clocked in Tuesday at 12 minutes and 8 seconds, or 16.1 percent of the total speaking time recorded by the eight 2012 Republican White House hopefuls.

While Gingrich’s tally was only 36 seconds greater than that of Mitt Romney (11:32, 15.3 percent), it marked the first time the former Massachusetts governor was not afforded the most speaking time since the CNN/Tea Party Express debate in Tampa, Florida on September 12th when he took a distant second to Rick Perry that evening.

And although there was some inequality in the distribution of speaking time Tuesday night, it was not as stark as in several recent debates during which Romney was given twice as much time to answer questions as at least half the candidates on the stage (e.g. New Hampshire #2, Nevada, Michigan).

The only candidate to get doubled-up on Tuesday was Herman Cain, who vanished with just 5 minutes and 37 seconds of screen time to his name, or 7.5 percent.

Gingirch’s rise in the polls has also seen him rise in the amount of speaking time he has received during the debates.

A little more than a month ago, when Gingrich was just about to crack double-digits in national polls, the former House speaker received the least amount of speaking time at the Las Vegas, Nevada debate.

By the time the Michigan debate rolled around on November 9th, Gingrich was polling in the mid-teens and en route to the second most speaking time at the Oakland University gathering.

Of course, with the increased face time, Gingrich has now invited greater scrutiny of his performance, and it remains to be seen how the public reacts to getting a closer look at the latest GOP frontrunner.