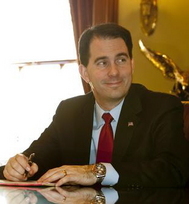 With Friday being the last day for Wisconsinites to sign and deliver their petitions to most recall offices around the state, the tempo now accelerates for what could be the beginning of the end of Republican Governor Scott Walker’s term in office.

Democrats collected over a half-million signatures by mid-December, with their initial goal of 720,277 likely to be exceeded according to some projections.

The final recall petition will be filed early next week to the Government Accountability Board after which a lengthy signature verification process will be conducted (31 days by law, plus an extra 30 days as requested by the Board).

The Board then allows 10 days for potential challenges of signatures.

Walker will then have served less than one and a half years in office at the time of the recall election.

And, if he loses, he will go down as one of the shortest-serving governors in Wisconsin history.

A Smart Politics review of Wisconsin gubernatorial data finds that if Scott Walker is recalled he will hold the third shortest stint as governor of the Badger State, and the quickest exit of any elected governor not to die in office.

Presuming Republicans will both issue challenges and, at the very least, see that at least a ‘fake’ Democratic challenger is suited up to ensure a primary election, the above timeline indicates a recall election would take place in mid-June at the latest.

So long as the election takes place prior to June 29, 2012, a recalled Walker will have served no more than 1 year, 5 months, and 26 days in office.

Only two of the state’s 45 governors have had a shorter stay in Madison – and both of these due to extremely unusual circumstances.

The shortest-serving governor in Wisconsin history was actually an acting governor – Arthur MacArthur, who served just five days from March 21 to March 25, 1856.

MacArthur was elected Lieutenant Governor in 1855 (on a separate ballot line) when one-term Democratic incumbent Governor William Barstow defeated Republican Coles Bashford by 157 votes out of more than 72,500 votes cast.

Barstow’s victory was challenged by the GOP and the Wisconsin Supreme Court found election fraud had been committed to Barstow’s benefit.

Governor Barstow quickly resigned before the Supreme Court’s official decision was handed down, which temporarily made MacArthur acting governor – that is, until Bashford came to the Capitol and forcibly removed MacArthur from office a few days later. 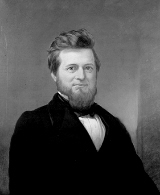 The only other Wisconsin governor to have held office for a shorter period than Walker is the state’s seventh governor, Republican Louis Harvey.

Harvey defeated Democrat Benjamin Ferguson by 8.4 points during the Election of 1861, and took office on January 6, 1862.

Governor Harvey led a relief expedition to aid Wisconsin outfits in the Civil War just a few months into his term, and tragically died after falling into the Tennessee River on April 19th.

Harvey served only 3 months and 14 days.

If Walker loses the recall contest and fails to make it to even the one and a half year mark, it will be quite a departure from the last two elected governors of the state – Republican Tommy Thompson and Democrat Jim Doyle.

Thompson (at 14 years and 28 days) and Doyle (at 7 years, 11 months, 29 days) are the two longest-serving governors in Wisconsin history.

Wisconsin does not have term limits for governors and switched from two-year to four-year terms beginning with the Election of 1970.

Prior to Walker, the average length of a gubernatorial administration in the Badger State has been 3 years, 8 months, and 3 days.

If recalled in mid- to late June, Walker would serve approximately 40 percent of that mark.

Length of Gubernatorial Service in Wisconsin