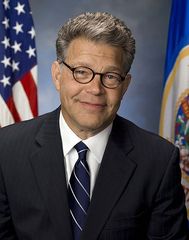 In the first of the “Connecting with Government” series presented by the Humphrey School’s Center for the Study of Politics and Governance, U.S. Senator Al Franken spoke at the University of Minnesota Tuesday on the subject of Science, Technology, Engineering, and Mathematics (STEM) education.

Although Franken set up his speech with a dour evaluation of the economic trend lines in the United States, he remained optimistic that a solution is in sight: the country needs to focus on infrastructure, technological innovation, and the education necessary to produce trained workers to fill jobs in these fields.

In a half-hour long speech and half-hour follow-up question and answer session with Center Director Larry Jacobs, Franken largely struck a serious tone, with only a few attacks against Republicans on Capitol Hill.

(The senator launched a few implied attacks against Republicans for not funding key infrastructure and education legislation and one against GOP U.S. Senate Minority Leader Mitch McConnell for his infamous comment, “The single most important thing we want to achieve is for President Obama to be a one-term president.”)

Although he peppered approximately one-dozen jokes into the event, Franken largely stuck to his policy guns, and that, according to Franken, is because:

“This is a serious job. I have real responsibilities to the people of Minnesota and I take it very seriously.”

And why so serious?

Franken stated that when he went to D.C. he had the following concern:

To alleviate these concerns of his colleagues, Franken says he took a cue from Hillary Clinton when she first entered Congress:

“Be a work horse, don’t be a show horse…Go to your hearings, go prepared, go early, stay late. Be a good colleague. Make friends with your senators on the other side of the aisle. And I’ve done all that.”

Franken also said he has purposely avoided the national press to help shirk the image that he was an attention-seeker, and says that “I do work in a bipartisan way.”

And, for his concluding remark, Franken offered up this final self-assessment:

“I’m just working as hard as I can. I’m learning every day. And I think I’ve done a pretty good job, actually.”