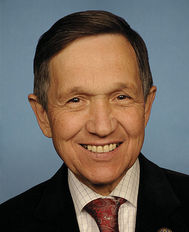 It is not yet known whether Ohio Democratic U.S. Representative Dennis Kucinich’s six-month flirtation that he might pack up and run for reelection in the State of Washington will damage his chances of returning to D.C. next fall in the state’s reconfigured 9th Congressional District.

Kucinich, who represents the 10th CD but was jittery about the Buckeye State’s newly drawn congressional district lines, had explored a 2012 run across the country in the Evergreen State – a bold move considering no U.S. Representative has won reelection in back-to-back cycles after moving to a new state in the history of the House.

Kucinich’s end of the year FEC filings suggest his Washington dalliance garnered the congressman only modest interest among residents of the state.

A Smart Politics review of itemized individual contributions to Dennis Kucinich’s 2012 campaign finds he raised the fifth largest amount of large donor money from Washington in 2011.

Two-thirds of this money ($5,265) was raised during the March-to September period wherein Kucinich was considering a run out west.

Two years ago, Kucinich raised just $1,000 in large donor money from Washington during this six-month time frame, and $2,950 for 2009 overall.

It does not appear that the congressman’s Washington exploration has hurt his in-state fundraising thus far.

Kucinich, now in his eighth term in the House in the Buckeye State’s 10th CD, will square off against 15-term incumbent Marcy Kaptur in the 9th CD in the Democratic primary.

Fortunately for Congressman Kucinich, his overall 2011 fundraising levels are up 123 percent over the same period two years ago.

Kaptur’s fundraising is likewise up 129 percent from two years ago, but on a much smaller scale than the former two-time presidential candidate.