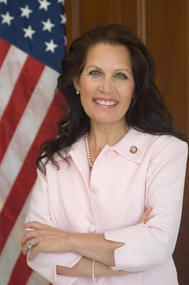 The unveiling of Minnesota’s new congressional district maps Tuesday brought early headlines of how the maps drew three-term Republican U.S. Representative Michele Bachmann out of her 6th Congressional District and into the Democratic-tilted 4th CD with six-term DFLer Betty McCollum.

Within a few hours, Bachmann made it clear that she would nonetheless still run in the 6th CD, which retains a large portion of her current constituency (and the state constitution does not require a representative actually live in the district he or she represents).

By the end of the afternoon, the always adept fundraiser from Stillwater sent a message to supporters attacking the decision of the “liberal courts” which she accused of “cherrypicking” her district.

Bachmann added that drawing her home outside the 6th CD was an “injustice” and evidence of “liberal bias” of the courts.

The former presidential candidate used this attack in a request for money from supporters as she “face(s) the challenge of reaching out to thousands of new voters.”

“Just as we suspected, the liberal courts have changed the makeup of Minnesota’s Congressional districts. The courts’ liberal bias was evident by cherrypicking the districts and going so far as to draw my home — where I have raised my family and represented in Congress for the past six years — outside the new sixth district.

I refuse to allow the courts to arbitrarily determine who my friends, neighbors, and constituents are, and I will take every necessary step to correct this injustice. I have therefore decided to campaign for re-election in the new sixth district, where a majority of my constituents remain. This will not be an easy task, but with your support today of $25, $50, $100 or more our campaign will have the funds necessary to run an effective campaign.”

Had Representative Bachmann chosen the unenviable task to take on Congresswoman McCollum in the St.Paul-heavy 4th CD, it would have been the first time two Minnesota U.S. House incumbents squared off against each other in state history.

In 2002, DFL U.S. Representative Bill Luther was paired up with another incumbent in his home 6th CD – one-term GOPer Mark Kennedy from the 2nd district. Luther opted instead to run in the newly drawn 2nd and ended up losing to John Kline, who had challenged him in the 6th CD in 1998 and 2000.

There have been five occasions in Minnesota history in which a sitting U.S. House member lost to a former U.S. Representative:

· In 1902, five-term Republican Loren Fletcher lost to former three-term Representative (and governor) John Lind. Lind had served his previous terms in the House as a Republican in the late 1880s and early 1890s.