More than 50,000 votes have been cast for ex-GOP presidential candidates this cycle 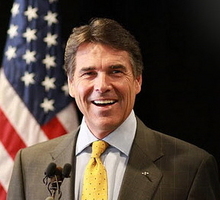 While the four remaining Republican presidential hopefuls attempt to beef up their delegate count from contest to contest, tens of thousands of Americans continue to vote for candidates no longer seeking the GOP nomination.

More than 52,000 votes have been cast to date for the four major candidates who have suspended their campaigns – Herman Cain, Michele Bachmann, Jon Huntsman, and Rick Perry – plus the two candidates who are currently seeking nominations by third parties – Gary Johnson (Libertarian) and Buddy Roemer (Americans Elect) – all after they exited the race.

Perry is currently edging Herman Cain by a 2,010-vote margin among the six individuals.

The Texas Governor has received 15,599 votes since the New Hampshire Primary with 13,589 going for Cain since Iowa.

Perry exited the race just a few days before the South Carolina primary about six weeks ago.

However, despite dropping out of the race 47 days earlier than the governor, Cain easily bested Perry in that contest, winning 1.1 percent of the vote in South Carolina by a 6,338 to 2,534-vote margin over Perry.

Governor Perry then went on to notch the most votes in the Missouri primary, Colorado caucuses, Michigan primary, and Arizona primary.

(Perry and Roemer were the only two ex-GOP hopefuls on the ballot in Arizona).

Jon Huntsman has received the third largest number of votes among this group at 10,175 since exiting the race after New Hampshire.

Huntsman’s best post-New Hampshire showing was in Florida, where he recorded the second largest number of votes for ex-candidates – coming in 574 votes shy of Perry’s 6,773-vote tally.

In fourth place is Michele Bachmann who has received 8,292 votes since suspending her campaign after the Iowa caucuses.

Roemer has only been an ex-GOP candidate for the last two primaries: Michigan, where he trailed Perry by just 32 votes at 1,906 to 1,874, and Arizona.