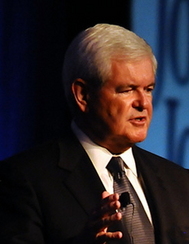 During Newt Gingrich’s Tuesday night pep talk to his supporters, the former House Speaker bragged about his home state victory by explaining how the media called his win in Georgia as the first call of the evening, shortly after the polls closed.

However, in addition to the fact that only two other Super Tuesday states closed at the 7 pm EST hour, Gingrich’s victory – while a necessary condition to keep him in the race – was one of the least impressive home state presidential primary victories in modern political history.

A Smart Politics review of presidential primary contests finds that Newt Gingrich’s 47.2 percent performance in Georgia was tied for the second lowest support for a Republican presidential candidate in his home state since the 1972 cycle, and the lowest number for a winning candidate.

Aside from presidents running without opposition, there have been 16 GOP candidates over the last 40 years who have carried at least one state during the primary season – and still been active in the race when their home state primary or caucus came up on the calendar.

(Note: Three additional Republican candidates who won at least one state did not participate in their state’s presidential preference contest – all in 1996. During that cycle, Pat Buchanan dropped out of the presidential race in March before the Virginia caucuses were completed, Steve Forbes exited the race before New Jersey held its primary, and Kansas opted not to hold their caucuses as a cost-saving measure when it became clear eventual home-state nominee Bob Dole was well on the path to victory).

Gingrich – who admittedly won Georgia on Super Tuesday by a comfortable margin of 21.3 points over Mitt Romney – fared quite poorly when stacked up against the record of most Republican White House hopefuls over the last 11 cycles.

Only one such Republican candidate received a lower vote total in his home state – Pat Robertson in 1988.

During that cycle, Robertson won just 13.7 percent of the vote in his native Virginia – some 39.5 points behind George H.W. Bush – and dropped out of the race shortly thereafter. (Robertson actually performed better in Bush’s home state of Texas, winning 15.3 percent of the vote there).

Gingrich is now tied just ahead of Robertson with John McCain – who also registered 47.2 percent in his 2008 victory over Mitt Romney in Arizona.

The only other notable Republican presidential candidate in the last 40 years who failed to win a majority of the vote in his home state was George H.W. Bush in 1980.

While Bush registered just above Gingrich and McCain at 47.5 percent, he actually failed to carry his home state of Texas that cycle – losing by 3.4 points to eventual GOP nominee Ronald Reagan.

Overall, the average Republican White House hopeful has averaged 63.6 percent of the vote in their home state since 1972 – some 16.4 points better than Gingrich.

When also taking into account Democratic presidential candidates, Gingrich’s 47.2 percent in Georgia ranks just 42nd best out of the 49 candidates who carried at least one state and participated in their home state contest since 1972.

Two of these candidates, Paul Simon and Jesse Jackson, hailed from the same home state in 1984 (Illinois).

Presuming he remains in the race, Rick Santorum will get his home state test in Pennsylvania on April 24th.

Excludes presidents who ran unchallenged (e.g. Ronald Reagan in 1984, George W. Bush in 2004), minor candidates who failed to carry a single state, and candidates who carried at least one state but dropped out of the race before their home state contest was held. Table compiled by Smart Politics.