Only seven states have had more than half of their presidential election contests decided by single digits over the last 100 years: Missouri, Pennsylvania, Wisconsin, Ohio, New Hampshire, Delaware, and Oregon

With the general election matchup between Mitt Romney and Barack Obama all but official at this point, media outlets and political prognosticators continue to unveil their lists of key states to watch this cycle.

Whether they are called “battleground,” “swing,” “purple,” or “toss-ups” states, the criteria is essentially the same – highlighting the states up for grabs in 2012 that will likely be the most hard fought for and narrowly decided contests across the country.

And while delegate-rich states like Ohio and Florida have made the cut for this designation during the last few elections cycles – and receive a lot of ink as a result – neither has been the most consistently competitive state in the nation over the decades.

A Smart Politics analysis of presidential election data finds that the states consistently generating the most competitive races over the last 100 years are Missouri, Wisconsin, and Pennsylvania, with contests in each state decided by single digits in 16 of 26 cycles since 1908, or more than 60 percent of the time.

The latest polls in these three states find Romney with a +3 advantage in Missouri (Rasmussen, April 17) and Obama up +4 in Wisconsin (Rasmussen, May 8), and Obama ahead by +8 in Pennsylvania (Quinnipiac, April 25-May 1).

Missouri has fallen off some battleground state lists for 2012 in what many analysts feel is a shift to the right in presidential politics.

Still, the Show Me State gets a slight edge over Wisconsin and Pennsylvania for the designation of “Battleground State of the Century,” for also claiming the most cycles in the nation of presidential contests decided by less than five points since 1908 with 12.

Missouri has been frequently known as the ‘Bellwether State’ of the last century – a status lost to Ohio and Nevada after the 2008 election.

Wisconsin owns the next most cycles decided by less than five points with 11, followed by Ohio with 10, Pennsylvania with nine, and New Hampshire with eight.

Aside from Missouri, Wisconsin, and Pennsylvania, the only other states which have had more than half of their presidential contests over the last century decided by single digits are Delaware, New Hampshire, Ohio, and Oregon at 14 cycles each.

Rounding out the Top 15 are Kentucky, Minnesota, Michigan, and Connecticut with 13 cycles decided by single digits and Tennessee, Massachusetts, Montana, and Colorado with 12 cycles.

Looking at a much narrower window of the last 40 years, Wisconsin and Pennsylvania have claimed the most cycles decided by less than 10 points with nine followed by Oregon and Missouri with eight.

Wisconsin also leads the nation with the most cycles decided by less than five points during this 40-year span with seven, followed by Ohio with six and Missouri, Nevada, and Pennsylvania with five.

The states with the longest active streaks of competitive presidential races are Colorado, Florida, New Hampshire, Ohio, and Virginia with five dating back to the Election of 1988 and Missouri with four.

And how valuable is this historical 100-year cheat sheet for the 2012 cycle?

Most, but not each of the Top 15 most competitive states over the last 100 years are considered states to watch this November, with Connecticut, Delaware, Kentucky, Massachusetts, and Tennessee slated to be the least competitive of the bunch.

Meanwhile, very few states on the back end of this list are likely to be competitive this November.

The 19 states with less than one-third of their contests decided by single digits over the last 100 years are:

· Maine and North Dakota with eight.
· Arizona, California, Oklahoma, South Carolina, and Texas with seven.
· Arkansas, Idaho, Rhode Island and Vermont with six.
· Louisiana, Mississippi, Utah, and Wyoming with five.
· Alabama and Georgia with four.
· Alaska and Nebraska with three.

While various media outlets and prognosticators differ as to the definition of a battleground state (and thus which states are defined by that category), the only states listed above that have been remotely mentioned as being competitive this cycle are Arizona (due to the state’s rising Hispanic population) and Maine (due to its independent streak and affinity for moderate Republicans).

It should be noted that, on occasion, blow-out elections can cause otherwise non-competitive states to end up being battleground or ‘toss-up’ states – though they are meaningless given the lopsided electoral vote outcome.

For example, in 1984 Ronald Reagan carried Massachusetts by 2.8 points as part of his 49-state rout.

Or, in 1932, Franklin Roosevelt won New Hampshire by 1.8 points as he crushed Republican nominee Alf Landon by over 500 Electoral College votes.

In that sense, there can sometimes be a disconnect in what the media designates as battleground or ‘toss-up’ states and the states that are ultimately the most competitively decided.

For, as unlikely as it seems, if Barack Obama loses Georgia by 5.2 points again in 2012 as he did four years ago, that probably means many of the ‘battleground states’ will be in the president’s column by double-digits in November.

The Most Competitive Cycles

Although the Election of 2000 was the most narrowly decided contest of the last 100 years from the perspective of Electoral College votes, it was a far cry from the most competitive within the states. 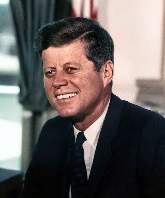 The most competitive cycle over the last 100 years was Election of 1960, in which the Kennedy-Nixon contest was decided by single digits in an astounding 34 states, or more than two-thirds of the country, including 20 states by less than five points.

By contrast, the Bush vs. Gore matchup saw winners carry just 22 states by single digits and only a dozen by less than five points.

Although the Regan-Mondale battle of 1984 was one of the biggest blowouts in U.S. history, it still produced eight closely decided state races, which is twice as many as the Warren Harding vs. James Cox matchup of 1920 (three) and the FDR vs. Alf Landon mismatch of 1936 (four).

Overall, including the District of Columbia, 469 of the 1,284 statewide presidential contests since 1908 have been decided by single digits, or 36.5 percent.

Republican nominees have eked out slightly more close shaves than their Democratic counterparts.

GOP presidential candidates have won 241 races by single digits compared to 221 by Democrats and another seven by third parties.