At a University of Minnesota event, Pawlenty discusses moderate Republicans, political compromise, and why Americans get the candidates they deserve 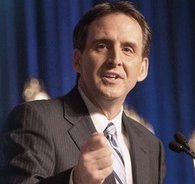 Former Minnesota governor and presidential candidate Tim Pawlenty proclaimed, “I’m not here to give a partisan speech” at a talk before the Humphrey School of Public Affairs at the University of Minnesota on Monday.

It was a rare public talk on substantive policy in his home state since Pawlenty exited the presidential race in mid-August of last year after finishing a distant third in the Iowa Straw Poll.

And for most of his 35-minute talk on “Restoring America’s Greatness” Pawlenty held true to these words in what was a policy-rich presentation on how reforms in entitlements, energy, education, and enterprise are crucial for the United States to reach that end.

In fact, Pawlenty only made two references to the president during the entire speech (on rejecting Simpson-Bowles and Obamacare), and none to the Republican presidential candidate he has endorsed, Mitt Romney.

But is the national political environment hospitable to implement the kind of bold changes in the area of “the four Es” Pawlenty described in his talk?

In a moderated conversation with Humphrey professor Larry Jacobs after his speech, Pawlenty remarked he could have added a fifth “E” to his speech: elections.

And, according to Pawlenty, the kinds of leaders America picks will go a long way in determining whether or not true change will come.

In short, America is getting what it deserves.

“What we have now is a vast majority of the public has decided not to participate in the early stages of party or electoral selection, vetting, gate-keeping process, so this has been delegated, if you will, to a relatively modest slice of the population on the right or the left. They perform the gate-keeping function. Everybody else shows up in November and says, ‘Why don’t we have better choices?'”

Implied in that statement, of course, is that Pawlenty himself would have been a better choice among the 2012 GOP field.

In addition to a large swath of potential voters simply staying at home during primaries and caucuses, Pawlenty attributes part of the problem of the types of candidates the general election ballot has to offer to a “Complex that’s developed in politics and entertainment and news that are fusing together in a way where it begins to elevate entertainment above policy.”

Pawlenty himself was certainly never charged with being the most dynamic or controversial figure in the Republican field.

Rewarding such candidates over those campaigning on serious substantive policies does not benefit those who are willing to bridge the gap between the two increasingly divisive parties.

But can there be a coming together of political leaders like in the days of Ronald Reagan and Tip O’Neill when political parties would compromise to do what was best for the country?

“Parties and elected officials shy away from compromise or pragmatism and stick very strongly to the positions that they have without any real desire or willingness to find some common ground…We have an industry around the right and left that does not reward anything other than the right and left’s perspective.”

So what should moderate Republicans do?

“I think all Republicans, all conservatives, anybody who cares about these issues should participate. The world is run by those who show up. The fuel of grassroots politics is passion…You can’t just say, ‘I wish it were different, please grant me an entitlement of influence.’ You have to show up and fight for it and work for it…People bemoan whether their perspective, or policy perspective or piece of the coalition doesn’t prevail, well, the answer is you’ve got to marshal your forces and go prevail.”

So, given this divisive political environment, how will the country ever enact the kind of bold reforms Pawlenty believes are necessary to ensure America’s greatness will be restored?

“One side or the other is going to have to substantially prevail to get quantum change, and I hope it’s my side obviously.”