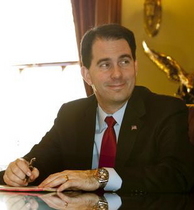 The contest marked the seventh major party gubernatorial rematch in Wisconsin history with the winner of the first contest successfully fending off the challenger five times against just two losses.

The last time a candidate sought such a rematch and won was in 1942 when Progressive Orland Loomis defeated one-term Republican incumbent Julius Heil after loing to the GOPer two years prior. (Loomis never took office, dying shortly after Election Day).

With Walker’s victory, incumbent governors have now been reelected at a rate of 74.5 percent in Wisconsin – winning 35 contests and losing just 12 times over the last 160+ years since statehood.

The third candidate on the ballot, independent Hari Trivedi, was a non-factor in the race – failing to eclipse one percent of the vote.

Only two independent candidates for governor in Badger State history have ever won more than 1 percent – and both were former major party officeholders.