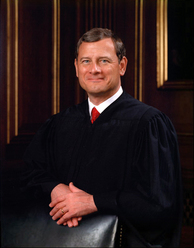 Mitt Romney may have had to mince words over the last year when explaining his support for his Massachusetts health care plan and his opposition to “Obamacare.”

However, the Republican 2012 presidential nominee has been quite clear of his support and respect for Supreme Court Chief Justice John Roberts who wrote the decision upholding most of the president’s health care plan on Thursday.

From the Courts & The Constitution section the campaign says:

“As president, Mitt will nominate judges in the mold of Chief Justice Roberts and Justices Scalia, Thomas, and Alito. These justices hold dear what the great Chief Justice John Marshall called “the basis on which the whole American fabric has been erected”: a written Constitution, with real and determinate meaning.”

Scalia, Thomas, and Alito – along with Justice Kennedy – were the four ‘no’ votes on the key individual mandate provision of the ACA.

Romney listed four with the Chief Justice first in line:

In the 14th debate at St. Anselm College in Manchester, New Hampshire on January 7th, ABC News moderator George Stephanopoulos and Romney got into an exchange on rights to privacy and gave Roberts another endorsement:

STEPHANOPOULOS: But you’ve got the Supreme Court decision finding a right to privacy in the Constitution.

ROMNEY: I don’t believe they decided that correctly. In my view, Roe v. Wade was improperly decided. It was based upon that same principle. And in my view, if we had justices like Roberts, Alito, Thomas, and Scalia, and more justices like that, they might well decide to return this issue to states as opposed to saying it’s in the federal Constitution.

Romney, of course, was not the only Republican presidential candidate to give the Chief Justice accolades during the 2012 campaign.

In response to Megyn Kelly’s question about their favorite Supreme Court justice at the Sioux City, Iowa debate, Roberts was listed by Rick Perry:

“And I would say, you know, you pick Alito, Roberts, Thomas, pick one.”

“I think that is a pretty darned good list. And I would sign up for those guys. Scalia is probably the most intellectual of the four. They’re all four terrific judges. I mean, if we had nine judges as good as those four we would be happy with the Supreme Court.”

“Well, I do think that there are good justices. And I would put Antonin Scalia at the top of the list. I would also include Clarence Thomas and John Roberts and Alito. I think they are all marvelous. It could be easy to pick any one of them.”

“And as I reflect on those who today serve I’ve got to say Justice Roberts and Justice Alito fit the bill very, very nicely.”

Only Ron Paul did not fall in line with the rest of the candidates on the stage:

How many Republicans will start walking back their endorsements of Chief Justice Roberts after today’s decision?