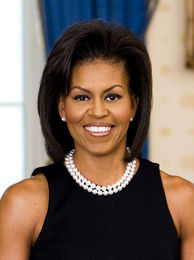 Although her husband has delivered some of the simplest State of the Union speeches over the last 75+ years – with all three written at an eighth grade level – Michelle Obama did not follow rhetorical suit on Tuesday evening.

A Smart Politics review of prepared remarks delivered by the spouses of presidential nominees at national political conventions finds that Michelle Obama’s 2012 speech to the DNC was written at seven grade levels above Ann Romney’s as measured by the Flesch-Kincaid readability test.

The First Lady’s speech on Tuesday evening was delivered at a grade level of 12.84 – more than 3.5 grade levels above the next highest speech of the 10 previous prepared remarks delivered by wives of presidential nominees since the first such address in 1992 by Barbara Bush.

Ms. Obama also held the previous record with her 2008 speech with a grade level of 9.28.

At the very bottom of the list – some 7+ grade levels below the First Lady – is Ann Romney.

The wife of the 2012 Republican presidential nominee gave a speech written at just a 5.80 grade level last Tuesday evening at the RNC.

Ann Romney’s speech was packed with much shorter sentences than Michelle Obama’s – coming in at less than half the average number of words per sentence (15.12) than the First Lady’s (30.66).

A previous Smart Politics report highlighted how Ms. Romney’s speech was extremely focused on the family vis-à-vis past speeches from the wives of nominees.

Consider how Romney delivers the following passage on wives and mothers, in her purported attempt to close the gender gap for her husband’s campaign:

But when Michele Obama addressed the subject of women in her speech, she took a different tactical approach, incorporating much longer sentences into her speech, such as the following passage about the president’s grandmother:

“And for years, men no more qualified than she was – men she had actually trained – were promoted up the ladder ahead of her, earning more and more money while Barack’s family continued to scrape by.”

In delivering their respective speeches, the end game of both spouses of the 2012 presidential nominees is to naturally sell their husbands to the millions of Americans watching them on television.

Consider the rhetoric Ann Romney chose in testifying as to the kind of leader her Mitt would be:

The heavy peppering of short, staccato-style lines in Romney’s remarks stands in opposition to the more drawn-out sentences written by the First Lady about her husband, like this:

“He’s the same man who started his career by turning down high paying jobs and instead working in struggling neighborhoods where a steel plant had shut down, fighting to rebuild those communities and get folks back to work, because for Barack, success isn’t about how much money you make, it’s about the difference you make in people’s lives.”

“That’s the man who sits down with me and our girls for dinner nearly every night, patiently answering their questions about issues in the news, and strategizing about middle school friendships.”

Ms. Obama’s speech is actually written at a higher grade level than all but 11 of the 70 orally delivered State of the Union addresses delivered since 1934.

As with all previous Smart Politics analyses of the readability scores of prepared remarks, it bears repeating that a simplistically written speech does not necessarily mean it is a poor speech, nor that a speech with longer sentences is necessarily superior.

What is interesting in this instance is the stark contrast in how the two political camps in the same election cycle rhetorically crafted their message through their spouses.

Whether or not one believes Ann Romney was speaking plainly, or speaking down to her target audience is one for the pundits to debate.