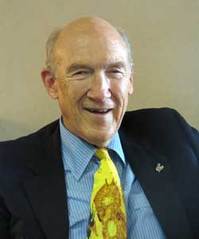 Being a former three-term U.S. Senator trumps an ex-White House Chief of Staff.

That might be one conclusion drawn from an analysis of broadcast media coverage of President Barack Obama’s National Commission on Fiscal Responsibility and Reform over the last three years.

The Commission, formed by Obama in February 2010, was co-chaired by Alan Simpson, former Republican U.S. Senator from Wyoming, and Democrat Erskine Bowles – Bill Clinton’s Chief of Staff for nearly two years in his second term.

Because the 18-syllable, seven-word Commission became a mouthful for reporters and analysts, it eventually became known as the “debt commission” or – more commonly – “Simpson-Bowles” or “Bowles-Simpson.”

But which co-chair’s name should come first when referencing the Commission or their 60+ page report issued on December 1, 2010?

Bowles receives the nod alphabetically, and he was the top Democrat for a body that was created by a Democratic president.

Simpson, however, is 14 years Bowles’ senior and served three terms in one of the nation’s highest elected offices.

And while Simpson eventually won out in media parlance, he did not get out of the gate so quickly.

A Smart Politics review of broadcast media coverage of the National Commission on Fiscal Responsibility and Reform finds that “Simpson-Bowles” has been the preferred nomenclature in 63 percent of media mentions with “Bowles-Simpson” coming in at about half that rate at 37 percent.

(Broadcast coverage was culled from a retrieval of full text transcripts of ABC, CBS, CNN, FOX, MSNBC, NBC, and NPR broadcasts via Lexis/Nexis).

For the first several months in 2010 after the Commission was formed, media coverage was light and journalists and commentators usually referred to it by its full official name:

“This morning President Obama meets with members with the National Commission on Fiscal Responsibility and Reform, a group that will look for ways to reduce the federal deficit. The president hopes to forge a bipartisan consensus on ways to improve America’s long-term fiscal health.” – Ann Curry (NBC, April 27, 2010)

“Of course, the president believes that it`s irresponsible to not look at the future of Social Security, specifically his National Commission on Fiscal Responsibility and Reform.” – Lawrence O’Donnell (MSNBC, August 30, 2010)

One of the first shorthand formulations of the Commission in the broadcast media was spoken by Democratic Pennsylvania Govenror Ed Rendell on NBC’s Meet the Press in early August of 2010:

“I think Simpson-Bowles is very important. I think both parties have to get together.” – Ed Rendell (NBC, August 1, 2010)

“Steven Moore said are there serious considerations being given to raising the retirement age. What do you think? You’re sort of saying we’ll wait for Bowles and Simpson, but what do you think should be done?” – Ali Velshi (CNN, August 14, 2010) 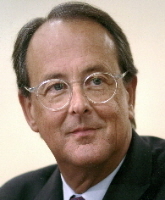 It was that billing, with Bowles on top, that tended to dominate the sporadic journalistic coverage of the Commission through its release of the report in December of 2010:

“The debt commission was created by President Obama but Bowles and Simpson made it clear this is not his proposal.” – Jonathan Karl (ABC, November 10, 2010)

“This was a — a big part of this proposal from Bowles and Simpson had to do with also having massive tax reform.” – Chuck Todd (MSNBC, November 11, 2010)

“I think the thing is in some ways extraordinarily timid, the plan, the Bowles and Simpson plan. But it does a brilliant job of spreading the pain around.” – Mark Halperin (MSNBC, November 12, 2010)

“All three, says Bowles and Simpson, are too pricey and have technical problems… Bowles and Simpson seem to be banking too much on weapons cuts… Bowles and Simpson are not talking about cutting the size of the armed services – that’s because so many troops are needed in Iraq and Afghanistan – but the co-chairmen are looking at cutting military pay and benefits.” – Tom Bowman (NPR, November 25, 2010)

In fact, when using the shorthand name of its co-chairs, the Commission was referred to as “Bowles-Simpson” in the broadcast media 61 percent of the time throughout 2010, with “Simpson-Bowles” mentioned less than four in 10 times.

By 2011, however, the fortunes of the former Wyoming U.S. Senator began to turn around and, by the end of the year, he had received a slight majority of first-billed mentions in the media.

From January through December of that year “Simpson-Bowles” was the preferred choice in 53 percent of the time on the seven broadcast outlets under analysis.

“You referred to it by its common name, Simpson-Bowles, after the chairs — the co-chairs of the commission.” – Andrew Napolitano (FOX, April 13, 2011)

“Well, one of the hits he was taking, John Ydstie, was that the president was ignoring his own commission, the so-called Simpson-Bowles commission.” – Neal Conan (NPR, April 13, 2011)

Some individuals, however, did not commit fully to either Bowles or Simpson as the lead name, and gave each co-chair his due by switching back and forth, such as the following by a Democratic Commission member:

“The Simpson/Bowles Commission laid out a plan. The commission that Senator Pete Domenici chaired laid out a similar plan. The “Gang of Six” have picked up these plans, especially Bowles/Simpson, and they are working on something they can present to the Congress the next week or the week after, saying, here, let`s — let`s take this, and run with it.” – Alice Rivlin (MSNBC, April 21, 2011)

“Well, Chris, I don`t know about more than 10 years, but certainly, as you know, Simpson-Bowles — Senator Simpson and former chief of staff Erskine Bowles, in their report, they posited that we needed to and they proposed making substantial cuts, raising revenues and dealing across the board with all items of expenditure… So, in the short term, I agree with the — the Bowles-Simpson suggestion that we be very careful in the short term.” – Steny Hoyer (MSNBC, July 8, 2011)

“We had a special committee! We had — we had the Bowles-Simpson committee… The Simpson-Bowles commission said there are 3,300 tax loopholes or whatever in the tax code, or earmarks in the tax code.” – Greta Van Susteren (FOX, July 25, 2011)

But all the momentum was clearly with Alan Simpson.

And now, nine months into 2012, the former Wyoming U.S. Senator has emerged as the report’s leading man, with 75 percent of broadcast media mentions of the Commission employing the “Simpson-Bowles” ordering this year:

“He could finally embrace Simpson-Bowles. He asked for it, he put it on the shelf for purely political reasons, he showed political cowardice by doing it, and an absolute fear of confronting the big issues in our country. And I think if he came out on Tuesday and said, “You know what, I was wrong to put Simpson-Bowles on the shelf. I should take it off the shelf, I’m going to send it to the Congress and I want to have a vigorous debate and discussion about really tackling debt and deficit in our country in an honest and forthright way, the way Senator Simpson and Mr. Bowles suggested.” It’s not that I agree with every part of Simpson-Bowles, David, but it is a realistic plan that merits consideration and discussion.” – Chris Christie (NBC, January 22, 2012)

“What we need to do is take a balanced approach to deficit reduction. That’s what Simpson-Bowles did.” – Rep. Chris Van Hollen (NBC, February 19, 2012)

“Well, he hasn’t — look, 2011 was a year when Republicans and Democrats, you had Simpson-Bowles, you had Canter-Biden, you had Boehner-Obama, you had the gang of six, you has the super committee. They all failed. And in three of those instances, Ryan was on the side of not compromising, right? He was on Simpson-Bowles commission. He voted against the final recommendation. Now it takes Romney’s ability to accuse Obama about from not embracing Simpson-Bowles away, right? His own guy didn’t embrace Simpson-Bowles.” – Ryan Lizza (CNN, August 11, 2012)

The Commission and its report have received renewed interest with a recent interview of John McCain on Bloomberg Television last week stating: “Everybody knows what the solution is, and that’s Simpson-Bowles.”

Overall, the number of mentions of the Commission through the first 8+ months of 2012 has equaled the coverage of 2010 and 2011 combined.

References to the Commission in August and September 2012 (156 and counting through September 25th) are at the highest level over a two-month stretch since the body was formed 31 months ago. 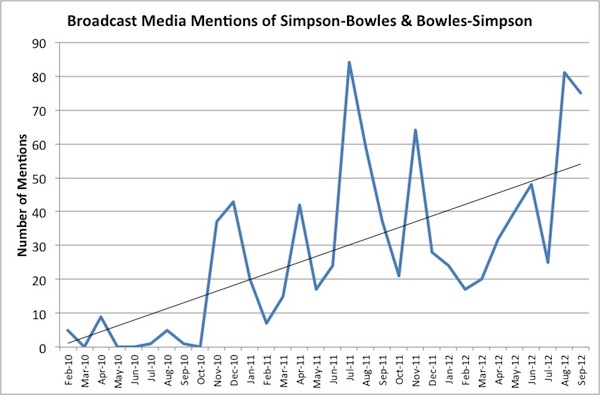