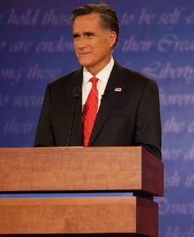 In the first presidential debate held nearly two weeks ago at the University of Denver, Romney’s rhetorical style stood out in direct opposition to the President – who was given nearly four and one-half more minutes to speak, but struggled to make focused, cogent points.

Meanwhile, Governor Romney – certainly well-rehearsed from 19 debates conducted during the GOP primary phase and over a year giving stump speeches on the campaign trail – rattled off his arguments and policy positions in a confident, rat-a-tat, bullet-point style.

Over his 38-plus minutes of speaking time in Denver, the former Massachusetts governor presented 10 PowerPoint-esque aural slides enumerating plans ranging from as few as two points (how he would replace Obamacare) to as many as five (the broad strokes of his economic plan).

And in case the audience lost track (and perhaps to ensure that he did not), Romney almost always numbered each point along the way.

“My plan has five basic parts. One, get us energy independent, North American energy independent. That creates about four million jobs. Number two, open up more trade, particularly in Latin America; crack down on China if and when they cheat. Number three, make sure our people have the skills they need to succeed and the best schools in the world. We’re far away from that now. Number four, get us to a balanced budget. Number five, champion small business.”

During the town hall debate Tuesday evening at Hofstra University, Romney attempted to pick up where he left off in Denver in terms of his rhetorical strategy.

When asked by a college student in the opening question what he would do to ensure he could support himself after graduation, Romney replied:

But the town hall format – in which it is more difficult for candidates to ignore the questions asked of them than if asked by a moderator – as well as more interruptions by the President made it difficult for Romney to continue to debate utilizing a laundry-list rhetorical format.

It would be well into the second half of the debate before Romney would revisit this argumentative style.

The second time Romney attempted his bullet-point list was in response to a question by an audience member of how he was different from President George W. Bush. In doing so, he discussed his 5-point plan – but was a bit rattled and only remembered to mention four points:

“President Bush and I are — are different people and these are different times and that’s why my five point plan is so different than what he would have done… my policy starts with a very robust policy to get all that energy in North America — become energy secure. Number two, trade — I’ll crack down on China, President Bush didn’t…Number three, I’m going to get us to a balanced budget…And then let’s take the last one, championing small business.”

Overall, Romney offered only four bullet-point answers during his 40+ minutes of speaking time at Hofstra – six fewer than in Denver – and three of these were abbreviated to just two points each.