States have voted more frequently for a presidential nominee of a different party than its sitting governor across 600 contests since 1968; even more so in battleground states 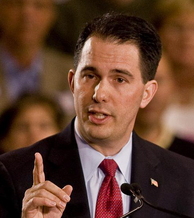 With the 2012 election just now appearing in the rear view mirror, campaign coverage has already begun to ramp up for the 2014 cycle – particularly in the dozens of gubernatorial and U.S. Senate races.

But before a bow is put on 2012 – and as a warning shot for those who might read too much into last November’s results – Smart Politics takes a moment to highlight one of the ways the media went awry after 2010.

After the Republican tsunami two years ago, numerous broadcast media anchors and analysts stated on air that the GOP gubernatorial pick-ups in several key battleground states would pose a problem for Barack Obama’s reelection campaign in 2012.

Media anchors, hosts, and analysts such as John King (CNN), Bret Baier (FOX), Joe Trippi (FOX), Gloria Borger (CNN), and Kirsten Powers (FOX) all remarked at the advantage Republicans would receive in the 2012 presidential race as a result of these gubernatorial victories, and the barriers it would place for an Obama reelection victory.

Smart Politics issued a study that challenged these statements and, 24 months before the 2012 election, projected that Barack Obama’s reelection fate in no way hinged on which party controlled the governor’s mansion in these battleground states.

The study showed there was no correlation between presidential victories in a state and the party of that state’s governor over the past 11 presidential election cycles dating back to 1968.

And while the Republican gubernatorial (and state legislative) success stories during the 2010 election cycle may have enabled the GOP to craft more favorable district lines for 2012 legislative races, the impact on which presidential nominee carried these swing states was, once again, non-existent.

Obama did not lose any of the battleground states in which Democrats fell flat in gubernatorial races two years ago.

In fact, almost all of the closest races in the country saw a presidential nominee carry a state with a governor in office from the opposite party – including all seven key GOP gubernatorial pickups in 2010.

Of the 16 states decided by single digits in 2012, 11 voted for the presidential nominee of a party other than its sitting governor, including each of the five states with the narrowest margin of victory.

Meanwhile, North Carolina (#3) and Missouri (#14) have Democratic governors and voted for Mitt Romney.

The only competitive contests in which the state voted for a presidential nominee of the same party as its governor were Colorado (#6), New Hampshire (#7), Minnesota (#11), Georgia (#12), and Arizona (#13).

Overall, across the 600 statewide presidential contests conducted during the 12 election cycles since 1968, states have now voted for a presidential candidate from a different political party than its reigning governor 301 times, or 50.2 percent.

Democratic presidential candidates have won virtually an identical percentage of states in which they have held control of the governor’s mansion (36.1 percent) as those in which Republicans had control (32.9 percent).

Meanwhile, Republicans have won 66.8 percent of states with a GOP governor and 63.0 percent of those with a Democratic governor.

Keep in mind – this data includes not simply battleground states, but all states.

And so, in short, if Democrats should pick up the governor’s mansion in many of these states in 2014, that fact, in and of itself, is no reason to believe the Party’s 2016 nominee is going to have a measurably easier time winning these swing states.

Presidential Vote and Party of Sitting Governor by State, 1968-2012