The five U.S. Senators who have announced their retirement during the 113th Congress are 10 years older on average than any ‘retiring class’ from the chamber over the last five decades 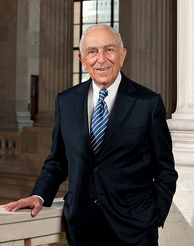 The announcement that Nebraska’s Mike Johanns would retire at the end of his first term from the U.S. Senate seems to suggest a trend is in play.

At the time of his announcement, Johanns was one of only two Senate Republicans to publicly back former Nebraska GOP Senator Chuck Hagel for Secretary of Defense. (Hagel had previously held Johanns’ Senate seat).

Meanwhile, Georgia’s Saxby Chambliss, another GOP Senator announcing his retirement at the end of his term, was criticized by some on the right during last year’s fiscal cliff negotiations when he publicly rejected Grover Norquists anti-tax pledge. This begat rumblings of a stiff primary challenge against the two-term Senator.

And thus, despite overwhelming conservative credentials, both Johanns and Chambliss have been cast by some as moderates who are leaving Capitol Hill because of the extreme partisanship and diminished productivity that has now touched the once congenial upper legislative chamber.

In addition to Chambliss and Johanns, three Democrats have also announced their retirements at the end of their term in January 2015 – West Virginia’s Jay Rockefeller, Iowa’s Tom Harkin, and most recently New Jersey’s Frank Lautenberg.

Add to the mix the 10 Senators who exited via retirement this past election cycle and the rate of exodus from the chamber is engendering speculation that departures over the three-cycle period since 2010 could reach a 40-year high.

While Johanns explained his reason for retirement as a desire for he and his wife to spend more time with “our family and our faith,” Chambliss cited his “frustration, both at a lack of leadership from the White House and at the dearth of meaningful action from Congress.”

But there may be an additional explanation as to why five Senators have already stepped out of the 2014 race just a handful of weeks into the new Congress.

The retirees are historically old.

A Smart Politics analysis of U.S. Senator retirement ages over the last 40 years finds that the ‘retirement class’ of the 113th Congress is thus far the oldest by more than four years at 75.4 years of age – and 10 years older than the average Senatorial retirement age during the previous 20 cycles.

Since the end of the 93rd Congress after the 1974 elections, 133 U.S. Senators have opted to retire from the Senate according to listings posted on Roll Calls’ Casualty List.

(Note: That tally counts a few Senators, including Lautenberg, who retired more than once; Lautenberg previously retired in 2001).

Only two other retiring class exited with an average age over 70 during the past 21 cycles:

The 75.4 average years of age for U.S. Senate retirees from the 113th Congress is also 10 years older than the average age of the 128 retirees who came before them during the preceding 20 Congresses (65.4 years).

Since the 93rd Congress, the 66 retiring Democrats have been 66.4 years old during this span while the 64 retiring Republicans have been 65.0 years old. (There have also been three independents who retired since the mid-1970s).

As for the ‘tired of D.C.’ hypothesis, it is true that the January 2015 retirees are not simply older but have also served longer in the Senate than most retirees before them over the last 40 years.

Upon their departure from the Senate in 22 months, Chambliss, Harkin, Johanns, Lautenberg, and Rockefeller will have served an average of 21.6 years in the chamber.

The only retiring class that had more experience over the last 40 years were those that exited at the end of the 107th Congress, who served an average of 22.6 years in the Senate.

Retirees at the end of the 110th Congress had also spent an average of 21.6 years in the chamber.

Of course, there is still plenty of time for announcements of additional retirees to come during the next one and a half years before Election Day which could change the demographics of those exiting in January 2015.

Though some possible retirees, like Democrat Carl Levin of Michigan and Thad Cochran of Mississippi will also be in their mid- to late-70s at that time.

It also should be noted that the average life expectancy in the United States has increased approximately six years since the end of the 93rd Congress in 1975 from approximately 72 to 78 years. 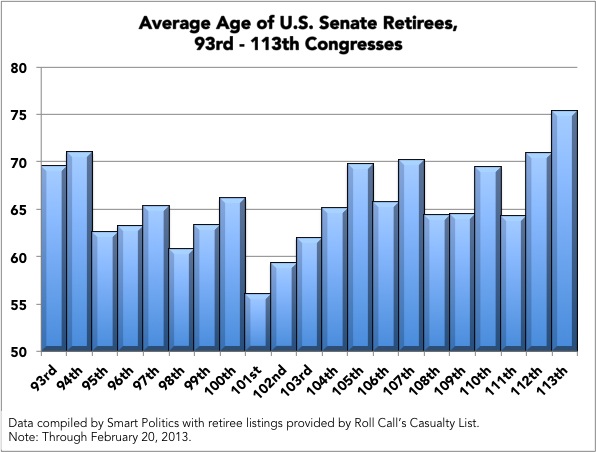