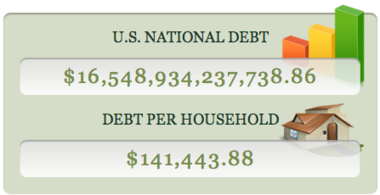 The sequester date has come and gone, but the issues of the unbalanced federal budget and the rising national debt is here to stay.

And nearly five-dozen Republicans on Capitol Hill are determined to keep fiscal issues and the debt front and center in the minds of their constituents.

Or at least those who visit their web sites.

A Smart Politics review of the official websites of all 532 current voting members of the U.S. House and Senate finds that 20 percent of Republican members (55) embed real time “debt clocks” on their home page – compared to only one Democrat (Oregon’s Peter DeFazio).

Overall, 47 of the 232 Republicans in the U.S. House (20.3 percent) and eight of the 45 GOPers in the U.S. Senate (17.8 percent) choose to shine a light on the issue of the rising national debt by including a ‘clock’ that changes in real time as the debt continues to grow every second.

The clocks on these Republican sites come in different shapes and sizes, with the most important feature that they are active – with the debt skyrocketing every second: 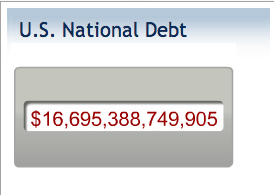 Especially when calculated down to the penny. 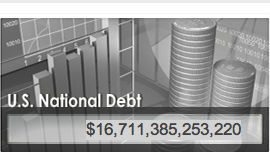 Some highlight the Capitol – where debt problems are created…and seemingly never fixed.

Others highlight both the Capitol and images of the money being spent there.

While some clocks show money just flying away.

Others clocks include the amount of debt incurred per citizen, down to fractions of a penny. 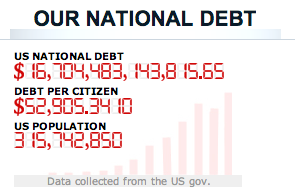 While others include the value calculated per household. 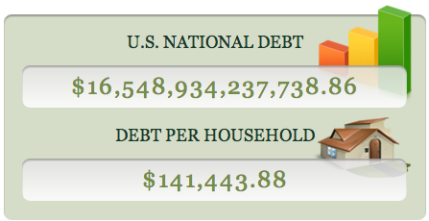 It should be noted, however, that not all Republicans can agree on just how much national debt the country has at the moment.

For not only do the debt clocks come in different shapes and sizes, they also vary as to the actual amount of debt that is spinning out of control before a clockwatcher’s very eyes.

As of 11 am EST on Sunday, the debt clocks running on these 56 websites revealed 16 different national debt tallies.

The debt clocks ranged from a low of $16.548 trillion (New Hampshire Senator Kelly Ayotte) to a high of $17.306 trillion (Oklahoma Senator Tom Coburn).

That’s a difference of 758 billion – or approximately 5 percent of the national debt.

(Note: Ron Paulite and North Carolina U.S. Representative Walter Jones’ debt clock actually gives two numbers. The first is the ‘official’ debt, calculated to be $16.589 trillion. The second is “the truth,” which states the actual debt is $72.781 trillion.

Overall, the average reading of the debt clocks across all 56 Senators and Representatives was $16.716 trillion.

The Senators’ debt clocks averaged $16.799 trillion – or about 100 billion higher than the representatives ($16.703 trillion). No two Senators shared the same debt clock reading.

The debt clock readings at 11 am EST Sunday were the following:

But while the issue of the national debt – in the form of a debt clock – takes center stage on the websites among a significant portion of the Republican caucus, the same cannot be said for the Democrats.

Only one of the 200 Democratic members of the House includes a debt clock on their home page: 14-term U.S. Representative Peter DeFazio from Oregon.

DeFazio, who serves on the Natural Resources and Transportation and Infrastructure Committees (but not the Budget Committee), prominently displays the debt clock right below his header on the upper right corner of his website.

DeFazio is the lone Democrat on Capitol Hill to display the clock as none of the 53 Democratic U.S. Senators embed such a clock on their websites.

But it is not simply debt clocks Republicans are implementing on their websites to graphically highlight the ails they view as facing the country today. 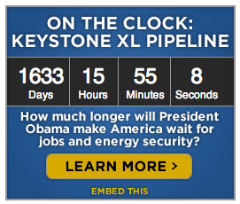 Ten Republican House members also have a Keystone XL Pipeline clock, which counts the number of days, hours, minutes, and seconds they say the nation has been forced to wait for “jobs and energy security.”

Another 10 GOP U.S. Representatives post a gas clock that depicts the change each week in the cost of an average gallon of gasoline compared to when Barack Obama first took office. 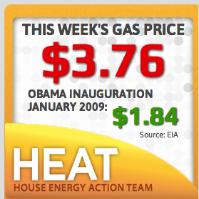 The cost of gas is currently just shy of $2 more per gallon ($3.76) than when Obama became president, according to the U.S. Energy Information Administration.

Diaz-Balart is the lone member of Congress to include a “Castro clock” on the home page of his official U.S. House site in which he counts the number of days, hours, minutes, and seconds a U.S. Citizen has been held hostage in Cuba.

Another clock that hasn’t quite taken off like that of the debt appears on the website of Mike Kelly of Pennsylvania’s 3rd CD, which highlights the number of “Days without a budget” , which recently eclipsed the 1,400 mark:

Note: Expect more debt clocks to pop up over the coming months as freshman members of the House and Senate tailor their official websites to their specific preferences (most are still using one of a handful of site ‘templates’ that were available upon taking office on January 3rd).

Note: Far right column denotes the national debt as expressed on the ‘debt clock’ on the home page of the respective Senator or Representative’s official website (in trillions) as of 11 AM EST, March 10, 2013. Table compiled by Smart Politics.