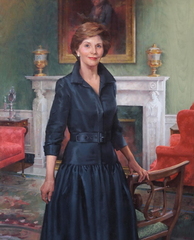 International Women’s Day was recognized a week ago celebrating the achievements of women across the world throughout history.

The First Lady remains one the most recognizable women in the United States, though her role, of course, has changed considerably throughout the centuries, from a social hostess to championing causes to shaping public policy.

While there are many beloved First Ladies in U.S. history, the biography of one such woman on the White House’s website, is particularly highlighted and a good deal longer than any other.

But her name may be a bit of a surprise.

It does not belong to the First Lady who spent the longest time in the White House (Eleanor Roosevelt).

Nor the first to hold a job after marriage (Abigail Fillmore).

Nor the first to die while her husband was in office (Letitia Tyler).

Nor to any of the iconic early First Ladies of a young nation (e.g. Martha Washington, Abigail Adams, Dolly Madison).

Nor to the woman who some called the “Secret President” when her husband suffered from ill health (Edith Wilson).

Though this First Lady was popular and did leave the White House with a very high favorability rating.

Laura Bush’s biography is 732 words long, with most of the information about her life detailing her work on education, human rights, women’s health, and global health issues during her eight years in the White House.

Bush exited the White House in January 2009 with a high favorability rating of 76 percent according to Gallup, though that was still a far cry from her mother-in-law Barbara’s rating of 85 percent in January 1993.

Bush’s biography is 29 percent longer than that of her predecessor – Hillary Clinton at 568 words.

Clinton’s biography, the second longest on the White House’s website, includes a mention of her tenure as Secretary of State, and would no doubt be updated and expanded should she run and win the presidency in 2016.

While there are many interesting stories behind the 45 official First Ladies (46 if one counts Frances Cleveland twice), Laura Bush’s biography is 227 words longer than average length of the other 44, who clock in at an average length of just 505 words.

(Mrs. Van Buren died nearly two decades before Martin won the presidency, but is officially considered a First Lady as he never remarried).

It is true more is known about First Ladies serving today due to their higher public profile and increased day-to-day exposure in the media.

However, the relative increased focus on Laura Bush is curious considering there is certainly a wealth of biographical information available about many iconic First Ladies, such as Eleanor Roosevelt and Dolly Madison – who rank 21st and 31st respectably for bio length on the White House website.