Incumbent DFL U.S. Representatives have faced primary challengers only 30 percent of the time in party history; Ellison has faced at least one every cycle 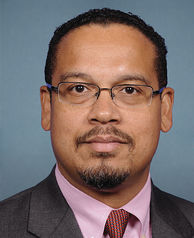 He wasn’t endorsed by his predecessor who served his district for more than a quarter century – even after winning his party’s primary.

Voter support for his candidacy during his 2006 general election victory was the lowest in his district since 1962.

And from time to time over his 3+ terms in office controversy seems to find this Democratic U.S. Representative from Minnesota.

However, Keith Ellison’s hold on his 5th CD seat in the Gopher State – one of the most liberal districts in the country – will never be in doubt…

…provided he continues to win the DFL nomination every two years.

And while that may seem like a foregone conclusion, Ellison has already faced a frequency of primary challenges unlike any other DFLer in state history.

A Smart Politics review of Minnesota election data finds that while just 30 percent of incumbent DFL U.S. Representatives have faced a primary challenger since the merger in 1944, Keith Ellison has had to do so all three times.

Ellison was first elected to Congress in 2006 – winning that cycle’s DFL primary with 41.2 percent of the vote in a seven-way contest as he defeated the Martin Sabo-backed candidate Mike Erlandson by 10.1 points. (Sabo had represented the district for 14 terms since 1979).

That was the lowest support ever received by a DFLer in the 5th congressional district since 1962 when Don Fraser knocked off Republican incumbent Walter Judd with 51.7 percent of the vote. The party has held the seat ever since.

During the next three cycles, Ellison has cruised to general election victories winning at least two-thirds of the vote, but has nonetheless faced at least one primary opponent each time:

What is noteworthy is not the fact that Ellison is losing 10 to 20 percent of the primary vote – but that he is being consistently challenged in the first place.

Overall, of the 138 DFL incumbents on the primary ballot since the 1944 merger only 42 have faced a primary challenge, or 30 percent.

Ellison meanwhile, is 3-for-3 and counting.

Ellison’s two DFL predecessors from his district, Martin Sabo and Don Fraser, faced primary challengers in only 40 percent of their reelection bids (in 3 of 7 cycles for Fraser and in 5 of 13 for Sabo).

None of the 42 primary challenges to sitting DFL U.S. Representatives in state history have been successful, although a few have come close:

Every other DFLer has received at least 65 percent of the vote when faced with a contested U.S. House primary.

To reiterate, despite some of the controversies that follow him, Keith Ellison is in no danger of losing his seat in a general election.

For example, during the Republican tsunami of 2010, Rep. Ellison still won more than two-thirds of the vote at 67.7 percent.

During the more Democratic-friendly years of 2008 and 2012 with Barack Obama at the top of the ticket, Ellison received 70.9 percent and 74.5 percent respectively.

In fact, Ellison’s 74.5 percent tally last November was the largest percentage of the vote received by a Minnesota congressional candidate since 1990 when DFLer Tim Penny notched 78.1 percent in his reelection bid from the state’s 1st CD.

In short, Ellison’s district is one of the most Democratic-friendly in the nation.

The real question, however, is whether a well-known, bona fide Democratic candidate will ever be ambitious enough to primary Ellison.

Successful primary challenges have happened numerous times across the country on the Republican side of the aisle in U.S. House and Senate races over the last few cycles – although usually in the form of partisan challenges from the right with criticisms that the sitting member of Congress was not conservative enough.

The same argument cannot be made from the left against Keith Ellison: his 2012 voting record was ranked as the 47th most liberal in the House by National Journal after tying for the #1 liberal ranking in the outlet’s 2011 edition.

It also can’t be said that a weakened Ellison from a close primary win – or a victorious challenger emerging from a brutal primary – would in any way hurt the chances of the Democratic Party from holding this seat.

So – just who could take on Ellison and win? 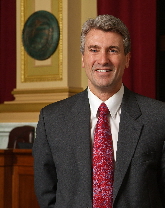 Perhaps the highest profile politician in the district is the soon to be ex-Mayor of Minneapolis R.T. Rybak, whose national profile has escalated during his last term.

Rybak – who became a Vice-Chair of the Democratic National Committee in 2011 – opted not to seek a fourth term as mayor this November.

Should Rybak ever want to seek a higher office than U.S. Representative but does not want to challenge a sitting member of his party, he’ll have to wait awhile as all state constitutional offices and both U.S. Senate seats are currently held by Democrats.

Another big name is former State Senate Majority Leader Larry Pogemiller – who served 30 years in the legislature from his Minneapolis-based district before stepping down in 2011.

Pogemiller is currently the Director of the Minnesota Office of Higher Education under Governor Mark Dayton.

For the moment, however, personal ambitions of the Minneapolis political class seem to be set aside and there is a ‘hands-off’ approach for the moment when it comes to the 5th CD.

For while no individual has a right to hold any political office, it would be naive to think it would not take courage for an establishment Democrat to be the candidate that unseats (or attempts to unseat) a member of the U.S. House who is the co-chair of the Congressional Progressive Caucus and one of just two Muslims in Congress.