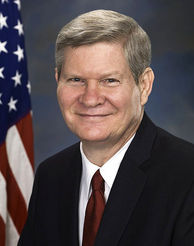 South Dakota Democrat Tim Johnson made it official Tuesday – the three-term U.S. Senator will be retiring from his seat at the end of 2014.

Speculation that Johnson would retire had been percolating for months, and his retirement undoubtedly increases the chances of a GOP pick-up in the deep red state in November 2014.

Former Republican Governor Mike Rounds is already running for the seat, though it is unclear how many primary challengers he will face as well as who will emerge on the Democratic side in an attempt to hold the seat for the party.

Johnson cited age as one of the reasons for his retirement and, to be sure, he has spent a long time on Capitol Hill.

In fact, at the end of his third term in January 2015 when he is 68 years old, Johnson will have spent over 41 percent of his life serving in the nation’s upper and lower legislative chambers.

A Smart Politics review of information provided in the Biographical Directory of the United States Congress finds that – at 26.2 years and counting – Tim Johnson has already logged in the second longest stretch in Congress out of the 52 men and women to serve from South Dakota in the U.S. House and Senate since statehood.

Johnson first entered Congress after an 18.4-point open seat win in 1986 to South Dakota’s at-large U.S. House seat after incumbent Tom Daschle opted to run for the Senate instead.

Johnson would win five terms in the House by an average of 32.5 points before upending three-term GOP incumbent U.S. Senator Larry Pressler by 2.6 points in 1996.

Johnson won reelection by a razor-thin 532-vote margin over John Thune in 2002 before cruising to a third term by 25.0 points during the Democratic wave of 2008.

All told, Johnson has served nearly 26 years and three months between the two chambers and, provided he finishes his term, will end up with 28 years of service by his retirement date in January 2015.

Even more impressive, Johnson owns more than 20 percent of the total time spent in Congress recorded by all South Dakota Democrats collectively (26.2 of 128.5 years, 20.4 percent).

The only South Dakota politician who has served longer in Congress in the history of the state is Republican Karl Mundt.

After Mundt and Johnson, only five other South Dakotans have recorded 20 or more years of service in Congress:

At-large U.S. Representative Kristi Noem – who some are suggesting may challenge Mike Rounds for the GOP nomination in 2014 – ranks 37th.

Length of Service on Capitol Hill by South Dakota U.S. Representatives and Senators