When Don Young was 18 years old, President Truman used the term “wetbacks” in a written message to Congress 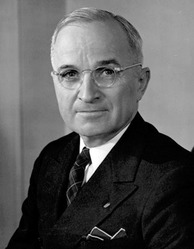 “My father had a ranch; we used to have 50-60 wetbacks to pick tomatoes. It takes two people to pick the same tomatoes now. It’s all done by machine.”

Representative Young later apologized, and in a press releases stated in part:

“There was no malice in my heart or intent to offend; it was a poor choice of words. That word, and the negative attitudes that come with it, should be left in the 20th century.”

In the mid-20th Century the term “Operation Wetback” was used in reference to a federal governmental program to crack down on illegal immigration along the U.S.-Mexican border.

A search of the Public Papers of the President finds that Harry Truman used the term on July 13, 1951 in a Special Message to the Congress on the Employment of Agricultural Workers from Mexico:

“But this is very limited progress, which hardly touches our basic farm labor problems. The really crucial point, which this Act scarcely faces, is the steady stream of illegal immigrants from Mexico, the so-called “wetbacks“, who cross the Rio Grande or the western stretches of our long border, in search of employment. These people are coming into our country in phenomenal numbers–and at an increasing rate. Last year 500,000 illegal immigrants were apprehended and returned to Mexico. In 1949, less than 300,000 were returned.”

So common was the phrase back then that members of the press corps used the term at least four times during press conferences with Presidents Truman and Dwight Eisenhower from the early to late 1950s:

“Mr. President, would you please tell us what you think of this bill which the Senate passed the other day, which said farmers should be penalized for harboring “wetbacks,” but that their employment would not mean harboring?” – Unidentified journalist, The President’s News Conference, February 7, 1952

“Sir, there are two bills put forward by your administration now on Capitol Hill before the Senate Judiciary Committee designed to curb the hundreds of thousands of Mexican wetbacks coming into this country. There is nothing being done now on that in the House. Do you plan to ask your congressional leaders to push this? I believe it is part of your program.” – Sarah McClendon, El Paso Times, The President’s News Conference, July 14, 1954

“Mr. President, the wetback legislation prepared by Attorney General Brownell is sort of bogged down in the Congress, and at the time it was introduced there was great urgency about it, and it seems to continue to be that. Do you plan to give the idea an additional push?: – John Herling, Editors Syndicate, The President’s News Conference, July 21, 1954

“Mr. President, sir, you recall last year we asked you to get from the Justice Department some reports for us on the Immigration Service about some hunting trips of Commissioner Swing into Mexico, and about a voyage of a Mexican vessel with wetbacks. You said, I believe, that you saw no reason why the public shouldn’t have these. They were requested by Congress, and Congress since has cooled to the demands for this information, but the public has never had this report.” – Sarah McClendon, El Paso Times, The President’s News Conference, April 10, 1957

On none of these occasions did Presidents Truman or Eisenhower use the term in their replies.

Since 1996, the term “wetback” has been used in Congress five times, according to a search of the Sunlight Foundation’s Capitol Words project – both in reference to the 1950s “Operation Wetback” program as well as in discussing hate crimes today:

“At the beginning of the Bracero program we had an increase in the number of illegal aliens coming into the country. The decrease that was caused was not by the Bracero program. It was by President Eisenhower instituting what was then called Operation Wetback that effectively sealed the border.” – Lamar Smith (R-TX), March 21, 1996

“We first confronted this problem directly in 1952, passing a law known in the parlance of the time as the “Wetback” bill, which made it a crime to harbor or abet undocumented immigrants.” – Ted Kennedy (D-MA), March 29, 2006

“Most Americans who are in favor of stricter border enforcement are not bigots. Far from it. But some politicians and other public figures see an opportunity to foment hate and hysteria for their own profit. They are embracing a nativism and xenophobia that recall the 1920s when a State Department warning about an influx about filthy and unassimilable Jews from Eastern Europe led to the first immigration quotas, or the 1950s hey-day of Operation Wetback when illegal Mexican workers were hunted down and deported.” – Charlie Gonzalez (D-TX), June 13, 2006

“And just recently in Round Rock, Texas where a bailiff called a young teenager who simply wanted to express their constitutional rights in walking out of a high school to claim some sort of dignity on immigration called them a wetback, and that same community charging them with misdemeanors for simply expressing their freedom of speech.” – Sheila Jackson-Lee (D-TX), June 13, 2006

“””After burning me in the center of the forehead, the skinhead attacker was heard saying that now I looked like an Indian with a red dot on my forehead. Moreover, the witnesses to the attack recall the two attackers calling me a ‘wetback‘ and a `spic’ as they continued to beat me as I lay unconscious. Once the attack came to an end, I was dragged to the rear of the backyard and left for dead.”” – Sheila Jackson-Lee (D-TX), July 23, 2007