Thirty-seven governors in U.S. history were elected into office at least five times but only 10 served in the 20th or 21st Centuries; four members of the Club are alive today 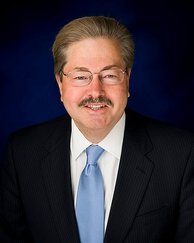 Iowa’s Terry Branstad, meanwhile, joined the gubernatorial chapter of the Club when he was elected in November 2010 and is one of just four living members.

Overall, there are slightly more than three-dozen members of the Gubernatorial Five-Timers Club, and its membership took many different routes to get in.

And some, in the late 18th and early 19th centuries did so without being elected by the public. (Various states, such as Georgia, Maryland, New Jersey, North Carolina, South Carolina, and Virginia, did not allow the direct election of governors via popular vote for years or decades, with state legislatures doing the honors instead).

In the coming months it will be determined whether veteran governors like Branstad, and other experienced but not-yet-in-the-Club governors like Rick Perry of Texas, John Kitzhaber of Oregon, and Jerry Brown of California will run for another term in 2014.

The thrice-elected Rick Perry is currently tied with Allan Shivers, M. Price Daniel, and John Connolly for the record in the Lone Star State as is Brown with former governor and Supreme Court Chief Justice Earl Warren in California.

But no new current governor is likely to join the Five-Timers Club, barring New Hampshire’s ex-Democratic Governor (and four times elected) John Lynch making a return bid in his state sometime down the road (in one of the two states, along with Vermont, which holds elections every two years).

And just how exclusive is the Gubernatorial Five-Timers Club?

A Smart Politics review of the election data of over 2,300 governors in U.S. history finds that just 37, or 1.6 percent, have been elected to the office at least five times, with just 10 who served in the 20th or 21st Centuries.

(Note: This analysis compiles a list of governors elected into office at least five times – whether by state legislature or popular vote – excluding terms served during pre-Constitutional period).

Aside from Branstad, the only other living members of the Club are fellow Hawkeye State Republican governor Robert Ray and Democrats Howard Dean of Vermont and Bill Clinton of Arkansas.

Branstad, who owns the record for the longest (non-colonial) gubernatorial service in the nation at 18 years and three months, is the only member of the Club who was elected exclusively to four-year terms.

The other nine members on the list elected since 1900 were victorious for gubernatorial terms in a combination of 1-, 2-, 3-, or 4-year stretches:

Even more exclusive is the 10-Timers Club, which features a membership of just nine governors.

Each was a governor of a northeastern state and each was elected to a series of one-year terms in the late 18th and early 19th Centuries.

Anti-Federalist Arthur Fenner leads the way with 16 gubernatorial election victories – the largest number of any governor in U.S. history.

The “Father of Rhode Island” was first elected in 1790 and then reelected fifteen times through 1805.

Fenner served until his death later that year.

Shortly thereafter, Fenner’s son, James Fenner, was elected 13 times to the Ocean State, although not all in one stretch.

Just ahead of the younger Fenner in second place is Federalist John Gilman who was elected 14 times in the State of New Hampshire.

Rounding out the 10-Timers Club for the most frequently elected governors in U.S. history are:

One-year gubernatorial terms are now a relic of our nation’s past, running its course in the last northeastern states in the early 1900s.

The states with the most governors in the Five-Timers-Club are all northeastern states with Massachusetts, Vermont, Rhode Island, Connecticut, and New Jersey accounting for 25 of the 37 members:

Membership of the Gubernatorial Five-Timers Club