One respected her more than any other world leader. One gave her the Presidential Medal of Freedom…and another celebrated Meryl Streep’s portrayal of her on film 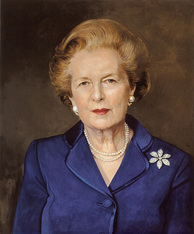 Near the end of his second term, Reagan called Prime Minister Thatcher “the statesman in the world that I have met that I respect the most.”

“In the critical hour, Margaret Thatcher and the people of Great Britain stood fast in freedom’s defense and upheld all the noblest of your island nation’s traditions; yours was the part of courage and resolve and vision.” – Remarks at the Welcoming Ceremony for British Prime Minister Margaret Thatcher (November 16, 1988)

Thatcher was given the Presidential Medal of Freedom less than four months after leaving office by President George H.W. Bush in March 1991.

So how was her legacy of leadership remembered by the three presidents who have succeeded the elder Bush?

Bill Clinton talked about Thatcher once as president, reminding Americans about the rare honor she received as a Presidential Medal of Freedom recipient and her role in ending the Cold War:

“Very few non-Americans have received the Medal of Freedom. The last year a foreign leader was honored was 1991, when President Bush presented the award to Margaret Thatcher. That day we celebrated a partnership among nations and leaders that helped to end the cold war with a victory for freedom.” – Remarks on Presenting the Presidential Medal of Freedom to Former Chancellor Helmut Kohl of Germany (April 20, 1999)

George W. Bush celebrated Thatcher three times during his presidency, always pairing her with Ronald Reagan, as an example of a world leader who fought communism and who believed in the undeniable power of freedom:

“The successors of Churchill and Roosevelt, leaders like Truman and Reagan and Thatcher, led a confident Alliance that held firm as communism collapsed under the weight of its own contradictions.” – Remarks at the “Churchill and the Great Republic” Exhibit (February 4, 2004)

“The Communists had the harsh rule of Brezhnev and Honecker and Ceausescu. But in the end, it was no match for the vision of Walesa and Havel, the defiance of Sakharov and Sharansky, the resolve of Reagan and Thatcher, the fearless witness of John Paul. From this experience, a clear lesson has emerged: Freedom can be resisted, and freedom can be delayed, but freedom cannot be denied.” – Remarks to the Democracy and Security Conference in Prague (June 5, 2007)

“John Paul’s election was followed by the elections of Margaret Thatcher and Ronald Reagan, who helped restore confidence in freedom’s power and pursued a policy of peace through strength.” – Remarks to the Organization for Economic Cooperation and Development in Paris, France (June 13, 2008)

And as for Barack Obama?

The 44th President had mentioned the Iron Lady just once prior to her death – in reference to the film The Iron Lady.

While delivering remarks at the 2011 Kennedy Center Honors, the president lauded honoree Meryl Streep and the varied roles over her career:

“Since then, Meryl has tackled incredibly complex roles, ranging from Julia Child to, most recently, Margaret Thatcher.”

No doubt the President will have a little more to say about the former Prime Minister during the days to come since her passing on Monday.