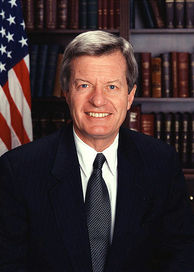 The announcement by Max Baucus on Tuesday that he would not seek a seventh term in the U.S. Senate adds another name to an ever-growing list of seasoned Democratic members of the nation’s upper legislative chamber who won’t be back in 2015.

The retirement of the senior Senator from Montana makes an even half-dozen members from the Democratic side of the aisle who will be stepping down at the end of their term in less than two years – each with at least 18 years in the chamber under their belt at that time.

Although Baucus’ popularity with his constituents may have been waning a bit in recent years, his departure opens up a seat that has been particularly elusive for the Republican Party over the decades.

In fact, it is one of just two seats the GOP hasn’t claimed in more than a century.

A Smart Politics analysis finds that Democrats have held Montana’s Class II Senate seat for a longer stretch than all but one seat of the 53 it holds in the 113th Congress at 100 years, 1 month, and 21 days through Tuesday, or 36,577 days.

Baucus is one of six elected and appointed Montana Democrats to hold the seat since the introduction of direct elections a century ago, along with Thomas Walsh, John Erickson, James Murray, Lee Metcalf, and Paul Hatfield.

(Note: The seat was vacant for just over a week after the deaths of Walsh in 1933 and Metcalf in 1978 before the appointments of Erickson and Hatfield respectively).

The last Republican to hold Montana’s Class II seat was Joseph Dixon, who went on to become governor of the Treasure State later in his political career.

Dixon served from 1907 until the end of the 62nd Congress in March 1913 when Walsh won the seat for the Democrats – and the Party has not relinquished it ever since.

The only other Senate seat that Democrats have held for a longer stretch is Louisiana’s Class II seat currently occupied by Mary Landrieu (who is also up for reelection in 2014).

Overall, four of the five longest held Democratic seats will be on the ballot in 2014:

More than one-third of the Democrat’s 53 U.S. Senate seats (18) have been under the party’s control (when not vacant) since the 1970s.