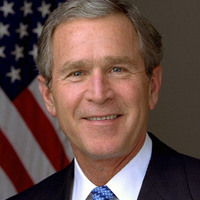 The unveiling of the George W. Bush Presidential Library in Dallas on Thursday gave a rare opportunity for the gathering of all five living U.S. Presidents, along with all five living First Ladies.

That’s a lot of pensions

The largest number of living U.S. Presidents at any one time has been six – occurring three times in our nation’s history:

Lonely at the top

Richard Nixon was the last president to serve without any other living ex-presidents.

Nixon is one of five presidents to serve at least part of their terms without any living presidents.

Other than George Washington, that list includes John Adams (with Washington dying halfway into his term), Teddy Roosevelt (with Grover Cleveland dying at the end of his second term), and Herbert Hoover (with William Taft dying in 1930 and Calvin Coolidge dying in January 1933).

Dying on their watch

Nixon and Ulysses S. Grant are the only two presidents to see three ex-presidents die during their tenure.

The ex-president who saw the largest number of presidents sworn into office was Martin Van Buren with eight.

Van Buren lived more than 21 years after his one term in the White House.