Chris Christie’s appointee will serve just 129 days in the Senate – the fourth shortest stint among the 65 U.S. Senators to serve from New Jersey since statehood 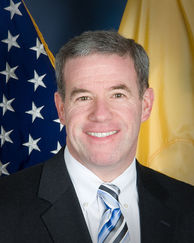 On Thursday afternoon Chris Christie announced he would appoint his long-time friend Jeff Chiesa to the U.S. Senate to fill the vacancy caused by the death of Frank Lautenberg on Monday.

Chiesa – who served as New Jersey’s Attorney General for the last 17 months – will leave his post when he is officially appointed on June 10th.

Although Governor Christie said he would welcome Chiesa to run in the October 16th special election to fill the remainder of Lautenberg’s term (ending January 3, 2015), the state Attorney General said he was not interested in doing so.

As a result, Chiesa will follow the longest-serving New Jersey Senator of all time with the fourth shortest Senate tenure in state history.

That is nearly four and a half more years than the second-longest serving Senator in New Jersey history – Republican Clifford Case, who served four full terms from 1955-1979 (8,767 days).

Chiesa, meanwhile, will serve from June 10th through October 16th for a period of just 129 days.

The only Senators to serve fewer days in the history of the Garden State are:

· Democrat James Wall: 49 days (January 14 to March 3, 1863). Wall was elected to fill the vacancy caused by the death of Democrat John Thompson and then failed in his reelection bid. Wall was the former mayor of Burlington, New Jersey.

· Republican Richard Field: 55 days (November 21, 1862 to January 14, 1863). Field was appointed after the death of Thompson and was succeeded by the aforementioned Wall after his election to the seat. Field was a former state assemblyman and attorney general and later became a United States District Court judge.

· Federalist Franklin Davenport: 89 days (December 5, 1798 to March 3, 1799). Davenport was appointed to fill the vacancy caused by the resignation of John Rutherfurd. Davenport had just been elected to the state’s 5th Congressional District, and served one term from 1799-1801.

The average length of service across the five-plus dozen Senators in state history is 2,503 days, or just shy of seven years.

Chiesa’s statement that he would not run for another term is not the usual decision made by appointees since the direct election of U.S. Senators over the past century.

Of the 190 Senators appointed to their position since 1913, only 70 opted not to become candidates when their seat came up for election (either in a special election or otherwise), or 36.8 percent.

Another 23 appointed U.S. Senators ran for their seat but lost their party’s nomination (19.2 percent) while 34 others lost in the subsequent general or special election (35.1 percent).

Only 63 of the 190 Senators ran for reelection, won their party’s nomination, and won the subsequent election (33 percent).

Fifteen of New Jersey’s 65 Senators in history were initially appointed to their position.

Length of service by New Jersey U.S. Senators Since Statehood

* Projected tally based on Chiesa’s stated intention. ** Through June 7, 2013. Table compiled by Smart Politics with data from the Biographical Directory of the United States Congress.