Less than 5 percent of the 208 Minnesota Republican U.S. House primaries over the last 50 years have fielded three or more candidates on the ballot (and only 7 percent of races without a GOP incumbent) 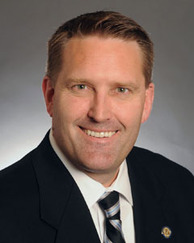 The addition of Republican State Senator John Pederson to the Republican field to replace Michele Bachmann in Minnesota’s 6th Congressional District now makes three candidates who have entered the race during the three weeks since the four-term Congresswoman announced her retirement at the end of the term.

Pederson’s announcement that he was exploring a congressional bid follows those made by former State Representative and 2010 GOP gubernatorial nominee Tom Emmer and Anoka County Commissioner Rhonda Sivarajah.

With more candidates potentially poised to enter the field in the coming months, one wonders if the Republican 6th CD primary will end up being a congested free-for-all come August 2014.

Some candidates may drop out even before the party endorsement is handed out in the 6th CD next year as winners and losers emerge in the competitive fundraising battle.

Others will likely abide by the endorsement process and subsequently drop out after the endorsed candidate is selected. (Emmer has already made that pledge; Sivarajah has made no such commitment).

A Smart Politics review of the last 208 Republican U.S. House primary races conducted since 1962 finds that four candidates appeared on the ballot only twice and three candidates just eight times.

Nine of these primaries were races held in districts, like the 6th CD in 2014, without a Republican incumbent on the ballot, but the victor captured a win in the general election only two times.

The 10th primary with three or more candidates during this 50-year span was last year’s 6th CD contest with incumbent Michele Bachmann.

Over these last 50 years, the Republican Party has fielded an average of 1.3 candidates per district during the primaries.

In the 127 primaries without a Republican incumbent on the ballot during this span the GOP has fielded an average of 1.4 candidates per district.

In the 81 primaries with an incumbent on the ballot Republicans have fielded an average of 1.2 candidates per district.

This dearth of competition in GOP congressional primaries from 1962 to 2012 lies in stark contrast to the previous 20 years.

During the 99 primaries from 1940 through 1960, Republicans averaged 2.1 candidates on the primary ballot.

Across these 11 cycles there were 25 GOP congressional primaries with at least three candidates on the ballot including the high water marks of:

The battered Republican primary winner emerged from each of these five contests only to lose the general election.

However, with 2012 6th CD DFL nominee Jim Graves abandoning his 2014 campaign shortly after Bachmann’s retirement announcement at the end of May, Democrats have little hope of winning the Republican-tilted district, even if the GOP undergoes a bruising primary battle along the way.