The newest member of the U.S. Senate breaks a record that had been held for 88 years – by a predecessor of his own Senate seat 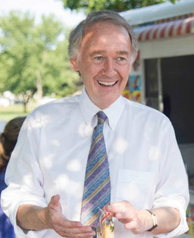 Ed Markey’s victory in Massachusetts’ U.S. Senate race Tuesday not only made him one of the oldest candidates to win a special election in the direct election era, but it also earned him a record he now holds all his own.

At one level, Markey’s accomplishment is rather pedestrian – becoming the 608th U.S. Senator to first serve in the House of Representatives.

(A few dozen other members of Congress served in the Senate first and then the House, such as Massachusetts’ own John Quincy Adams).

But Markey did not just serve in the House – he served longer than any other newly minted Senator in the nation’s history.

A Smart Politics study of congressional records finds that Ed Markey served longer in the House of Representatives than any other elected or appointed U.S. Senator in history – demolishing a record that has been held for 88 years by 1,700 days.

Markey has served 36 years, 7 months, and 26 days in the House of Representatives through Thursday, or 13,387 days.

The Senator-elect will continue to pad that total as he waits to be sworn in while the State certifies his election over the coming days.

Markey shatters a mark that had been held for 88 years, when one of his predecessors to the Bay State’s Class II Senate seat graduated from the nation’s lower to upper chamber during the Calvin Coolidge administration. 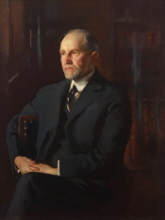 Republican Frederick Gillett served 16 full terms and 32 years (11,687 days) from March 4, 1893 to March 3, 1925 in the House of Representatives from Massachusetts’ 2nd congressional district.

After serving his last three terms as Speaker of the House, Gillett was elected to the Senate in 1924 and served one term in the chamber from 1925 until his retirement in 1931.

Gillett’s record of sweating out 16 terms in the House before getting a Senate seat stood for the next 88 years, until Markey threw his hat into the ring and won John Kerry’s old seat this week.

Markey’s accomplishment would have been rare even if he had served just half as long in the House of Representatives.

Of the 608 Senators with prior House experience in U.S. history – only 10 had first served at least 10 terms in the lower chamber.

The third longest pre-Senate tenure in the House of Representatives after Markey and Gillett belongs to Jeffersonian-Republican Nathaniel Macon of North Carolina at 13 terms (1791-1815).

Most Terms Served in House of Representatives Before Election or Appointment to U.S. Senate

With the addition of Markey, now 25 of the 53 U.S. Senators in Massachusetts history first served in the House, or 47.2 percent.

That is the third highest rate in the nation for states that elected (or appointed) U.S. Senators with prior House service.

Alaska is the only state never to groom one of its Senators with a stint in the U.S. House, with Oregon (8.1 percent), Wyoming (14.3 percent), Florida (14.7 percent) and Nebraska (16.2 percent) rounding out the bottom five.

Percentage of U.S. Senators Who First Served in the U.S. House by State

Table includes Senators who were elected and appointed to the office, including each state’s first two senators elected at statehood. Data compiled by Smart Politics.

Markey’s election to the Senate also brings the current total number of Senators with prior House service to 52 – tied with the 109th Congress for the most since the turn of the 20th Century (U.S. Senate historical records date back only to the 56th Congress).

The 113th Congress falls short of the stand-alone record during this period due to the death in December of long-serving Hawaii U.S. Senator Daniel Inouye who had served two terms in the House at the beginning of his D.C. legislative career.

Among actively-serving U.S. Senators, Maryland Democrat Ben Cardin had the most House experience prior to Markey among his colleagues who had served in the lower chamber.

Cardin served 10 terms from Maryland’s 3rd CD prior to his election to the Senate in 2006.

With the addition of Markey, the average length of time served in the House among these 52 Senators is 4.9 terms.

All but seven did so without a gap in service between the two chambers.