Obama may love the food, but the 41st President used his distaste for the green vegetable as a punchline dozens of times during his four years in office 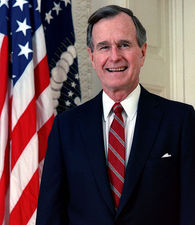 President Barack Obama’s (playful?) admission that broccoli was his favorite food at the Kids’ State Dinner Tuesday is the first time he’s mentioned his love of the healthy vegetable as president.

Few presidents have taken the time to discuss broccoli over the decades…with one notable exception – George H.W. Bush.

Smart Politics content analyzed Bush’s statements in the Public Papers of the President and found the 41st President mentioned broccoli 70 times while in office.

By contrast Ronald Reagan only mentioned broccoli once with Clinton doing so one time (in reference to George H.W. Bush) and George W. Bush doing so eight times (with most referring to his Dad’s hatred of the vegetable).

The brouhaha over broccoli during George H.W. Bush’s term began in March 1990, when he made a joke that the workers in the Office of Personnel Management would get merit pay “in broccoli.”

He was then asked by a journalist if he had “lost the broccoli vote” after that barb to which he replied:

Now, look, this is the last statement I’m going to have on broccoli. There are truckloads of broccoli at this very minute descending on Washington. My family is divided. I do not like broccoli. And I haven’t liked it since I was a little kid, and my mother made me eat it. And I’m President of the United States, and I’m not going to eat any more broccoli. Wait a minute. For the broccoli vote out there, Barbara loves broccoli. She’s tried to make me eat it. She eats it all the time herself. So, she can go out and meet the caravan of broccoli that’s coming in from Washington. – The President’s News Conference, March 22, 1990

For the next two-plus years of his administration Bush would cleverly introduce his hatred of broccoli in his various speeches and remarks.

Below are Bush’s Greatest Hits which include remarks about broccoli as the cause of death of Zachary Taylor and the extinction of the dinosaurs:

There’s something wrong with this country. I read a poll taken by a New England newspaper, a Boston newspaper, a national poll, that showed 79 percent of the people liked broccoli. – Remarks at a Republican Party Fundraising Dinner in Detroit, Michigan, April 3, 1990

And also, let’s pledge to eat a balanced and nutritional diet, avoid excessive alcohol use and, of course, say no to drugs. And all you broccoli lovers, eat your heart out, out there. – Remarks on Signing the National Physical Fitness and Sports Month Proclamation, May 1, 1990

You’ll be pleased, this will be a short speech. I will leave before the broccoli. Did you see the kid over there while I was speaking at Oklahoma State University holding up a sign: “George, eat your broccoli.” I don’t need advice from little kids about what I’m going to eat. – Remarks at the Oklahoma Foundation for Excellence Dinner in Tulsa, May 4, 1990

These guys that did that extra applauding over here, you young guys, you can have my broccoli when they serve the lunch. – Remarks at a Fundraising Luncheon for Governor Guy Hunt in Huntsville, Alabama, June 20, 1990

You know how I feel about raising taxes: I’d rather eat broccoli for breakfast. – Remarks at a Fundraising Barbecue for Representative Bill Grant in Tallahassee, Florida, September 6, 1990

And John (Rowland) tells me that he would have made it to Congress earlier, but his mother said he couldn’t leave the table until he finished his broccoli. So, that took him 3 or 4 years. – Remarks at a Fundraising Dinner for Gubernatorial Candidate John Rowland in Stamford, Connecticut, October 23, 1990

No, I can’t say this is the best thing that’s happened to us since sliced bread or the elimination of broccoli. – Remarks on the Federal Budget Agreement and an Exchange With Reporters in Honolulu, Hawaii, October 27, 1990

But I guarantee you one thing: If they send me that bill to make these kids eat their broccoli, I will veto that legislation. – Remarks at a Rally for Gubernatorial Candidate Bill Price in Oklahoma City, Oklahoma, October 29, 1990

Speaking of my health, which I am reluctant to do, but you might know that I just received a note — a true story — from a farmers’ organization. And it said: “This wouldn’t have happened if you had eaten your broccoli.” I don’t want to get in a fight with them; just give me thyroid problems any day. – Remarks at the Federal Bureau of Investigation Academy Commencement Ceremony in Quantico, Virginia, May 30, 1991

And back in Washington, that was the fateful day that Zachary Taylor gobbled down those cherries with buttermilk. It’s a little-known fact, not disproven by when they dug the poor guy up the other day and put him back, that his last words were, “Please pass the broccoli.” – Remarks at an Independence Day Celebration in Marshfield, Missouri, July 4, 1991

Governor Ashcroft, whom I forgive for declaring broccoli the State vegetable. – Remarks at the Fundraising Dinner for Senator Christopher S. Bond in St. Louis, Missouri, November 13, 1991

Okay, Barbara won the broccoli war. I said what I thought, and she got out and received all these broccoli growers. And sales shot up about 500 percent. – Remarks to the National Grocers Association in Orlando, Florida, February 4, 1992

I’ve looked over some of the things you’ve had to do to win in the Olympiad, and I’d never be able to build a musical instrument out of nonmusical materials or identify the age of reptiles. Mesozoic, I’m told is the correct one there for you amateur paleontologists. That’s also around the time that dinosaurs started eating broccoli, your history books will tell you. I don’t want to get off of this subject, but did you notice the other day they said broccoli is good for your health? I’ve felt it was a medicine all along. – Remarks to the Medal-Winning Teams of the National Science Olympiad, March 27, 1992

But there are a couple of things I don’t like to do. You know one, eating broccoli. But the other is speaking where Barbara has already spoken. It’s sort of like being asked to play guitar after Garth Brooks. – Remarks on Signing the Higher Education Amendments of 1992 in Annandale, Virginia, July 23, 1992

Starting today, I will not only argue passionately that broccoli’s benefits are overblown — but that sugar wafers should be one of the four essential ingredients in a healthy diet. – Remarks to Holland American Wafer Employees in Wyoming, Michigan, July 27, 1992

You see, breakfast speeches are always my favorite. I figure it’s the one meal where broccoli is never served. – Remarks at a Prayer Breakfast in Houston, August 20, 1992

As for the younger Bush, he chided his Dad’s aggressive dislike for the healthy food on occasion:

Second, eat a nutritious diet. That means at least five fruits or vegetables a day. I’ve got a little work in my family. We’ve been working on the old–well, been working on “Number 41” to eat broccoli for all these years. – Remarks at the White House Fitness Expo, June 20, 2002

Do I like broccoli? It’s okay. I’m not nearly as turned off by it as my dad is. If you really want to get into it, I kind of like the top of the broccoli. I don’t like the stalk itself–not that good. – Remarks in a Discussion in Broadview Heights, Ohio, September 4, 2004

Broccoli–they got a really high tariff on broccoli at my father’s house. – Remarks on World Trade Week, May 23, 2008