Although a frequent critic of the president and Obamacare, Chief Deputy Whip Peter Roskam proudly underscores his old relationship with Obama on his House website 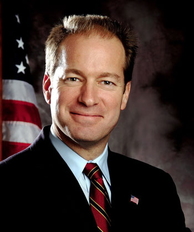 Barack Obama has not had the warmest reception from House Republicans since taking office in 2009 – and GOPers would probably say the very same about their treatment from the president.

However, one Republican U.S. Representative – and a member of the party leadership no less – highlights his association with the President, and in a high profile venue.

Roskam has been a vocal critic of the president over the last few years – particularly with regard to Obamacare and economic issues.

Roskam became Chief Deputy Whip in the 113th Congress, but on his official U.S. House website, the congressman includes a short biographical sketch which reads in part:

“Roskam has represented Chicago’s western suburbs in both the Illinois House of Representatives and Senate, where he served alongside then State-Senator Barack Obama.”

So why does he choose to highlight his relationship with Obama in one of them?

Perhaps the congressman is simply providing an unusual tidbit.

It is true that Roskam is the only current member of the Illinois U.S. House delegation (and Congress generally) who can claim to have served with Obama back in the day at the state legislature.

Republican Randy Hultgren is the only other current Illinois U.S. Representative who came from the Illinois Senate, but he served in the chamber after Obama left, from 2007 to 2010.

Halvorson entered the Illinois Senate with Obama in 1997 and served there until 2008 (becoming majority leader in 2005) when she was elected to Congress and served one term.

Despite their history in Springfield, it is odd for Roskam to namedrop his past linkages with Obama, especially while in the GOP leadership (let alone the fact that Obama is one of the party’s most vilified political opponents in recent memory).

To be sure, Roskam has hardly used kid gloves when it comes to Obama’s policies and has had very explicit criticisms of the president since becoming Chief Deputy Whip:

“What a way to begin a second term. This week, President Obama disbanded his jobs council as our nation’s GDP shrunk for the first time in over three years and the national unemployment rate went up to 7.9 percent.” – February 1, 2013

“Today, the void of presidential leadership was on full display. Instead of getting in a room with Senate Democrats and passing a sequester replacement plan, President Obama chose to get behind a podium and give yet another speech.” – February 26, 2013

“The new normal under President Obama of high unemployment and a stagnant economy doesn’t have to be our future.” – April 10, 2013

“The veil has been lifted: the closer we get to implementation, Obamacare’s problems only get worse. It is essential that we work to bring fairness to all Americans, protect individuals from this disastrous law and spare our economy from the Obamacare train wreck.” – July 17, 2013

But perhaps, there are some fond memories for the congressman as he recalls the days they shared together at the Illinois Capitol.

Roskam has previously discussed working across the aisle with Obama back in Illinois on issues such as death penalty legislation, but says he now sees a different person in the White House.

From a December 2012 interview on Bloomberg’s Capitol Gains, Roskam remarked:

As for the President, he has spoken about Roskam in public on a few occasions since entering the White House.

During a question and answer session with the House Republican Conference in Baltimore in January 2010, Obama remarked, “Oh, Peter is an old friend of mine.”

At a February 2010 discussion on cost containment at a bipartisan meeting on health care reform, the president noted, “We took some additional ideas from folks like Congressman Roskam.”

In November 2010, Obama acknowledged Roskam at a Veterans Day ceremony in Seoul, South Korea: “A former colleague of mine in the Illinois State Senate who is now a Congressman from the great State of Illinois, Peter Roskam, is with us here today. So give him a big round of applause.”

And so, even though they are political adversaries now on a national stage, Roskam’s House profile page suggests he too still feels some regard for his former Springfield colleague.