New Jersey leads a pack of Northeastern and Midwestern states with the highest rate of independent and third party candidates in U.S. Senate elections over the past century 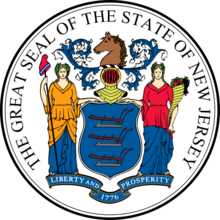 A few months ago there was perhaps greater suspense as to when New Jersey Governor Chris Christie would set the state’s upcoming U.S. Senate special election as opposed to which party would likely win the seat.

With some controversy, Christie set the election for October 16th – a few weeks in advance of the already scheduled general election in November.

As expected, Democratic Newark Mayor Cory Booker has been doubling up on his Republican opponent Steve Lonegan in the polls, but there is another telling aspect to the Garden State’s Senate race.

In addition to Booker and Lonegan, there will be six other candidates in the election to fill Frank Lautenberg’s old seat:

But it isn’t the novelty of a special election that has driven these half-dozen candidates (with colorful party names and campaign slogans) onto the ballot this October.

Rather, elections to the nation’s upper legislative chamber replete with non-major party candidates have been par for the course in New Jersey politics throughout the last century.

A Smart Politics review of U.S. Senate election data over the last 100 years finds that New Jersey far and away leads the nation for the highest rate of third party and independent candidates appearing on the ballot in U.S. Senate contests.

For this study, Smart Politics tallied every independent and third party candidate whose name appeared on a general or special U.S. Senate election ballot plus write-in candidates who received at least 0.1 percent of the vote.

Across the 1,826 popular vote U.S. Senate races conducted through New Jersey’s October 2013 special election, there have been 2,510 non-major party candidates vying for a seat, or approximately 1.4 per contest.

New Jersey, however, is in a league of its own.

During the 39 popular vote races through the October contest, there have been 187 independents and third party candidates in Garden State U.S. Senate elections, or an average 4.79 per contest.

Unlike most states, New Jersey has consistently placed a flurry of non-major party candidates on the U.S. Senate ballot throughout the direct vote era from the 1910s through the decade-plus of the 21st Century. 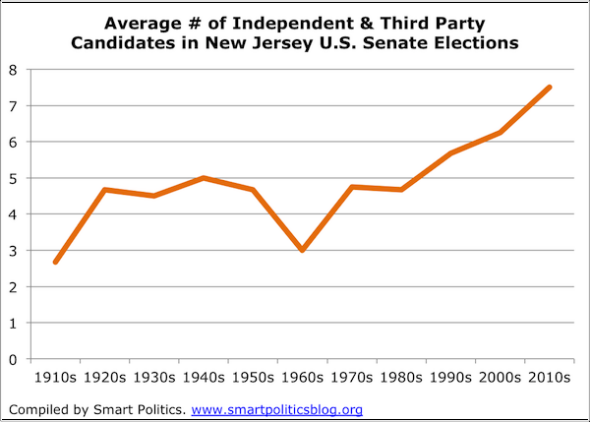 But what makes the consistently strong presence of non-major party candidates in New Jersey U.S. Senate elections so fascinating is that none have been particularly successful, unlike strong third party movements that have flourished for a time in other states (e.g. Wisconsin and the Progressives, Minnesota and the Farmer-Laborites).

The best showing among these 15+-dozen candidates in New Jersey over the last one hundred years is the 4.1 percent received by Socialist nominee James Reilly in a 1918 race won by Republican Walter Edge.

Of course, variation in the number of non-major party candidates running in U.S. Senate races across the country is due not only to differences in political culture but also ballot access.

Some states have higher hurdles, such as requiring several thousand signatures for a statewide run. (New Jersey requires just 800).

Regional variations in the number of non-major party candidates gaining ballot access are quite evident at the top of the list.

Northeastern and Midwestern states populate each of the Top 7 slots as well as 12 of the Top 16.

On the other end of the spectrum, 20 states have averaged less than one independent or third party candidate on the ballot in U.S. Senate races over the last century.

South Carolina’s Strom Thurmond (1954) and Alaska’s Lisa Murkowski (2010) were also famously elected as write-in candidates while nominated candidates from their respective parties appeared on the ballot.

Update: Thanks to Richard Winger of Ballot Access News for pointing out that appointed California incumbent Republican William Knowland won a 1946 special election as a write-in candidate. (Knowland also simultaneously won election to the full term with his partisan designation, but there were no candidates on the ballot in the special).