Republicans incorporate the American flag on their 2014 campaign websites at a 45 percent higher rate than Democrats, but the presence of Old Glory is down 39 percent overall from the 2010 cycle

Is it no longer politically advantageous to campaign with the American flag?

Members of Congress seemingly think so – at least when it comes to the visual symbols prominently featured on their reelection campaign websites.

A Smart Politics analysis of the 400+ members of the U.S. House running for reelection finds that the presence of the American flag in the header image of campaign websites is down 39 percent from the 2010 cycle.

Smart Politics examined the campaign websites for all U.S. House incumbents and coded whether or not a photograph or representation of the U.S. flag was included as part of the featured “banner” or header image (the top images that appear on every page on the site).

Back in 2010, nearly half of Republicans (47.1 percent) and one-third of Democrats (34.7 percent) featured the American flag on their websites, or 39.9 percent of U.S. Representatives running for reelection.

In the 2014 cycle, however, those numbers have dropped across the board, although the relative difference between Republicans and Democrats is now even greater.

Use of American Flag in Banner Image of U.S. Representatives’ Campaign Websites by Party

That means House Republicans currently incorporate the flag on their campaign websites at a 45.4 percent higher rate than House Democrats – up from 35.7 percent in 2010.

One explanation for the greater GOP use of the flag can be seen through the differences between male Republican and Democratic U.S. House members.

There is no difference between the use of the flag on the campaign websites between female Republicans (17.6 percent, 3 of 17) and their Democratic counterparts (17.9 percent, 10 of 56).

As for regional differences, House members from the South were most likely to use the image of the flag on the campaign websites, with 29.4 percent doing so.

For those members of Congress who do choose to prominently associate their candidacy with the symbol of the American flag, there is great variation as to how such flags are incorporated on their campaign websites.

Some flags are huge, like the one backing Indiana Democrat André Carson:

While others are barely there, such as the microscopic flag on Florida Republican Daniel Webster’s site: 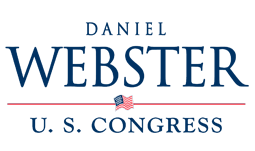 For some U.S. Representatives, one flag is not enough.

Not only does Alabama Republican Mo Brooks pose with two flags, but he raises the stakes by throwing the U.S. Constitution into the mix:

Some U.S. Representatives substitute images of actual flags for those created by their graphic designers, such as Oregon Republican Greg Walden:

As does Mississippi Democrat Bennie Thompson:

With Michigan Republican Fred Upton not to be outdone:

Some U.S. Representatives are more subversive, such as Florida Republican Richard Nugent.

Not only is the flag on his campaign website subtly placed in the background, but it appears in reverse to the viewer:

LoBiondo’s header image features a family photo of the long-serving U.S. Representative, along with his wife and…American flag kerchiefs worn by his two dogs: