The Daily Caller and POLITICO by far led the way with the most front page stories this weekend on the controversial Texas U.S. Senator 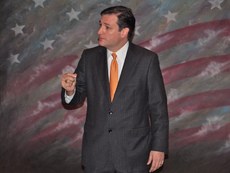 The duration and controversy of Ted Cruz’s marathon speech on the floor of the U.S. Senate last Tuesday and Wednesday was sure to make a large footprint – and the media certainly obliged.

But now, days after Cruz’s speech came to an end, the variation in continued coverage of the Texas U.S. Senator between media outlets is quite drastic, with some putting Cruz’s speech and the attending political (and electoral) repercussions in the rear view mirror and others continuing to cover every possible angle.

And which outlets have given Senator Cruz and his speech the longest political half life?

Smart Politics surveyed the online front pages of three-dozen news outlets on Saturday, September 28th, and found the Daily Caller and POLITICO had the most stories devoted Texas U.S. Senator Ted Cruz – accounting for more than 20 percent of Cruz stories among all outlets.

That was tops among the three-dozen national outlets under analysis, with POLITICO in second with 12, BuzzFeed third with nine, and Huffington Post, Roll Call, and Salon with eight each.

Not all front page coverage of Cruz was particularly meaty, however.

In a digital age in which an only recently-elected officeholder can become a household name overnight, a number of playful Cruz-related stories also appeared on various political front pages:

Other outlets still hitching a fair number of box cars to the Cruz train over the weekend were The Atlantic with seven stories on their political home page Saturday evening, CNN and the Blaze with six, and Business Insider, HotAir, National Journal, and Newsmax with five each.

However, not all news outlets are as Cruz-centered in their political reporting.

Meanwhile, Bloomberg, FOX, National Public Radio, and the Wall Street Journal featured only one story on Cruz by Saturday evening.

* Indicates the front page of the politics section of the media outlet. Table compiled by Smart Politics.