During Jeopardy’s Teachers Tournament, three educators could not name the capital city from where Tim Pawlenty governed for eight years 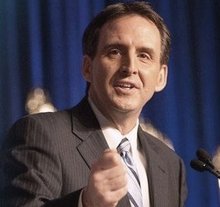 While most contestants on the popular game show Jeopardy! have probably memorized the nation’s state capitals, they may not be quite on top of who governed from them.

Even if that governor served for eight years over the last decade and was a presidential candidate just over two years ago.

On Wednesday’s episode of the annual Teachers Tournament (#6708), former Minnesota Governor Tim Pawlenty was mentioned for the fourth time on the program.

In the Jeopardy round, the sixth category for the contestants was “T.P. Your House.”

Karen Cafaro, an English literature and composition teacher from Georgetown, South Carolina, buzzed in incorrectly with: “What is Iowa City?”

While Pawlenty’s short-lived presidential candidacy did bet the farm on Iowa and its straw poll in 2011, a better incorrect guess would have been “Des Moines” – the actual capital of the Hawkeye State.

Neither of the two remaining contestants buzzed in, leaving host Alex Trebek to reveal the correct question, “What is St. Paul?”

While teachers may not have been the biggest fans of the Republican Pawlenty administration during his gubernatorial tenure, the former Gopher State governor might be a bit disheartened to learn none of the three contestants were able to collect on his $200 clue (although there was not a Midwesterner in the group).

For in addition to his presidential run and eight years as governor from 2003 to 2011, Pawlenty continued to make national headlines throughout 2012 for being on the short list of running mates for Republican nominee Mitt Romney.

Pawlenty hasn’t always had such “Do you know who I am?” moments on Jeopardy!, however.

Over the last five years his name has appeared in a clue or the answer on three other occasions – each of which were answered correctly by the first contestant to buzz in.

After leaving his position as co-chairman of the Romney campaign in September 2012 Pawlenty began serving as the CEO of the Financial Services Roundtable.