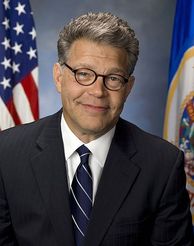 Polling has been sparse in Minnesota’s 2014 U.S. Senate race – a contest that a year ago was seemingly a slam dunk for one-term DFL incumbent Al Franken.

Franken’s seat currently sits on the ‘watch list’ of D.C. prognosticators Charlie Cook and Larry Sabato – both identifying the race as a ‘likely’ hold for Franken, with the caveat that the race may yet become competitive.

Such caution seems validated in light of a new St. Cloud State University poll that was released on Wednesday, which shows Franken receiving a job approval rating of just 39 percent among his constituents – 18 points behind the state’s senior delegation member Amy Klobuchar at 57 percent.

(The only bright spot of the St. Cloud State poll for the Franken campaign is that the survey was conducted of adults, not likely voters).

If a strong Republican candidate emerges out of its nomination process in 2014, Franken and the Gopher State could once again be faced with the possibility of turnover in its Class II U.S. Senate seat.

Sixteen different Minnesotans have held this seat during the direct election era dating back 100 years ago.

That compares to just 10 men and women who have held the Class I seat currently occupied by Klobuchar.

A Franken loss would also mean party control of the seat will have flipped in three consecutive general elections – a feat that has never happened in the history of Minnesota.

In fact, the Gopher State has flipped partisan control of one of its U.S. Senate seats in back-to-back cycles only twice since statehood – with both beginning with the death of a multi-term sitting senator.

The first case occurred after Republican Knute Nelson was elected to his fifth and final term in 1918.

Nelson died in office in 1923 and a special election held later that year sent Farmer-Laborite Magnus Johnson to D.C.

Johnson would then lose his seat in 1924 when Republican Thomas Schall won the next general election.

The only other instance came after the election of DFLer Paul Wellstone in 1996, who died six years later just a few weeks before Election Day.

Republican Norm Coleman was subsequently elected in 2002 only to be defeated by Franken in 2008 after a recount and prolonged court challenge.

This general partisan stability in Minnesota’s U.S. Senate seats has occurred even though just 12 of the 21 men and women elected to the chamber in the direct election era won a second term.

Put another way, slightly more than two-thirds of Minnesota U.S. Senators who sought a second term from their seat were victorious over the last century, or 11 of 16.