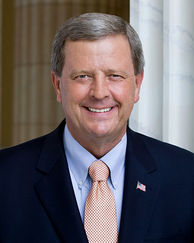 The surprise announcement by Iowa Republican Tom Latham Tuesday that he would not seek reelection to Iowa’s 3rd Congressional District in 2014 means the Hawkeye State U.S. House delegation will be down at least two incumbents come January 2015.

Congressman Latham is the Dean of Iowa’s U.S. House delegation and his absence, along with that of four-term Democrat Bruce Braley who is running for Tom Harkin’s open U.S. Senate seat, means Iowa’s U.S. Representatives will be rather green in the 114th Congress.

Latham is the only Iowan on the Appropriations Committee where he has the fifth most seniority on the GOP side of the aisle.

But Iowans won’t simply be electing two freshmen to fill the seats of Latham and Braley in 2014 – they will also be sending their least experienced House delegation to D.C. in decades.

A Smart Politics study finds that Iowa’s U.S. House delegation to the 114th Congress in 2015 will have at a minimum the fourth least experience in the chamber for the state across the last 35 Congresses since the end of World War II and the least experience since the 96th Congress elected in 1978.

As it stands now, Iowans will elect at least two freshmen in 2014 and, for the sake of discussion, will presumably reelect six-term Republican Steve King in the 4th CD and four-term Democrat Dave Loebsack in the 2nd CD.

That will leave the state with a delegation averaging 3.5 terms of service during the 114th Congress. (Counting freshmen as serving one term).

Of course, if either King or Loebsack are defeated in 2014, the collective delegation experience will drop even further in 13 months.

The last time the average tenure of Iowa’s delegation to the nation’s lower legislative chamber was as low as 3.5 terms was during the 95th Congress elected in 1976 when the average was 3.2 terms.

Only two other House delegations were less seasoned from the Hawkeye State since the first election after World War II in 1946.

One came just two years prior during the 94th Congress (after the Election of 1974) with the delegation of Leach, Smith, Grassley, Blouin, Harkin, and Bedell clocking in at an average of 2.5 terms.

In the 1974 cycle, one incumbent ran for the U.S. Senate (five-term Democrat John Culver), another retired (13-term Republican Harold Gross), and two were defeated in the general election (four-term Republicans Bill Scherle and Wiley Mayne).

Coming close to that mark was the Iowa delegation for the 89th Congress after the Election of 1964, averaging 2.6 terms of service.

Overall, the average length of service among Iowa delegation members since 1946 is approximately a decade at 5.2 terms. 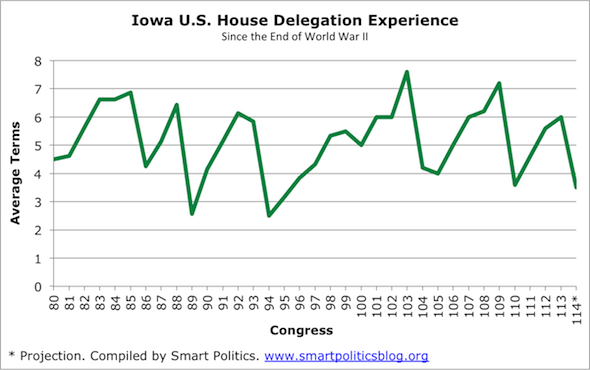