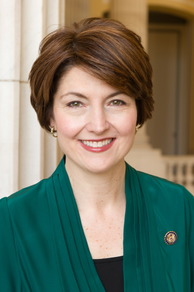 As chair of the House Republican Conference, Representative McMorris Rodgers is the highest-ranking Republican woman in Congress.

To be sure, the Washington U.S. House member’s selection does continue a general trend by the GOP to put forth younger faces before the public to deliver these televised speeches.

At 44 years old, McMorris Rodgers is the youngest of the five women ever to deliver a televised Republican response to a presidential State of the Union Address – and just the second woman to give the speech solo.

The only other woman to deliver a solo GOP opposition response was then New Jersey Governor Christine Todd Whitman in January 1995 during Bill Clinton’s first term.

Whitman was 48 years old at that time.

The other three Republican women to give such speeches are:

Excluding the GOP 1968 response, in which 16 members of Congress spoke, McMorris Rodgers is the fifth youngest Republican to give a televised opposition response to the SOTU of the 24 who gave solo addresses or shared the podium with just one other speaker.

The four younger Republicans to give solo or joint responses were:

The oldest Republican to deliver a SOTU response was Kansas U.S. Senator Bob Dole in January 1996 – just a half-year before he would resign from his seat during his failed presidential run.

Dole was 72 years old at that time.

On the other end of the spectrum, Wisconsin U.S. Representative William Steiger – one of the 16 Republicans to give comments in 1968 – was just 29 years old during his first term in the chamber.

Overall, GOPers from 20 states have delivered televised opposition responses since the first such speech in 1966.

Officeholders from Illinois, Michigan, and Tennessee have done so four times, with three each from Arizona, California, and Wisconsin, and two from Kansas, Oklahoma, Texas, Virginia, and Washington.

At 44, McMorris Rodgers is eight years younger than the average GOP speaker delivering such opposition responses over the last 45+ years.

The only other Republican in a Congressional leadership position to deliver a SOTU response who was younger than McMorris Rodgers was Minority Leader Howard Baker of Tennessee in 1968 at 42 years old.