One of Capitol Hill’s most outspoken critics of the mass data collection undertaken during the last two presidential administrations shares his thoughts on fear-mongering, Edward Snowden, and the long winter of 2014 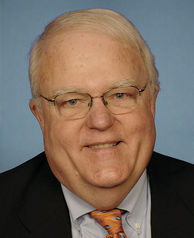 On Tuesday morning, 18-term Wisconsin U.S. Representative Jim Sensenbrenner gave a talk at the Humphrey School of Public Affairs to discuss privacy concerns and constitutional overreach over the last decade-plus stemming from the implementation of the Patriot Act and the subsequent lack of oversight on the intelligence community.

The Republican congressman introduced the USA FREEDOM Act in October 2013 to rein in this unchecked intelligence gathering to better protect the civil liberties of U.S. citizens by outlawing all types of bulk data collection.

The act also opens up the FISA court so that changes in policy are made public and would be subject to debate and potential amendment to the statute. A public advocate would also be appointed as part of the FISA court and appear before it and appeal decisions that the advocate deemed went beyond the facts and the law.

The legislation is sponsored on the Senate side by Democratic Judiciary Committee Chairman Patrick Leahy of Vermont.

On those who would say security concerns are more important than privacy concerns:

“I get sick and tired of (people) saying that we shouldn’t be concerned at all about privacy and civil liberties because that will end up being the precursor for somebody turning this country into a totalitarian state.”

On what his fear-mongering critics claim will happen if Sensenbrenner’s legislation is passed:

“If we pass your bill, the bombs bursting in air and the rocket’s red glare are going to be going off repeatedly.”

On the strange bedfellows of the Leahy-Sensenbrenner partnership:

“This is called plowing new fields.”

On where Barack Obama comes down on security versus privacy concerns and the USA FREEDOM Act:

“The president does not really have a firm position on this and he’s kind of gone back and forth…The White House still is somewhat in a quandary on exactly what to do.”

Quoting Barack Obama’s admission during a meeting at the White House with Sensenbrenner and the Patriot Act, all the while expanding it overreach on privacy:

“During the campaign my people and I gave you a lot of crap on this.”

On whether members of Congress are well-informed on the rapid pace of technological change and the increased ability of government to gather and store large amounts of data to stay on top of the issue:

“Not really. Some of us are better informed than others.”

On whether America is in the midst of a Constitutional crisis?

“If this continues, yes. If the law is amended, no…Sooner or later we are going to get to a Constitutional crisis and it will probably be one that is more severe than Watergate.”

On who is to blame for the NSA overreach and current privacy concerns?

“All three branches failed to do oversight.”

On what should happen to Director of National Intelligence James Clapper for lying to Congress:

“Clapper ought to be fired and he ought to be prosecuted. He’s admitted he broke the law. How President Obama has allowed this man to be able to get away with committing a felony by his own admission and staying in his job, I don’t know.”

“This winter’s been the pitts.”