The fourth longest-serving U.S. Representative in Wisconsin history has faced only two primary challengers during his 17 previous reelection bids 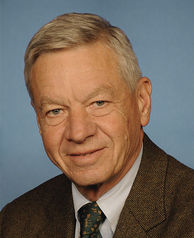 Could yet another moderate be exiting the U.S. House of Representatives after the 2014 elections?

Grothman has served 9+ years in the senate after a 12-year tenure in the assembly.

Grothman will run to the right of Petri, who recorded the 29th most liberal voting record among Republican representatives in the 113th Congress according to National Journal’s 2013 ratings.

Petri voted more conservative than just 56.8 percent of the chamber – good for the 203rd most conservative overall.

Wisconsin’s 6th CD has a +5-point GOP tilt, making it the 190th most Republican-leaning district in the nation.

Petri, who will turn 74 in May, is one of the longest-serving U.S. Representatives from the Badger State and is unaccustomed to primary fights.

During Petri’s 17 reelection bids dating back to 1980, the congressman has had to face a primary challenger just two times – and neither were established political figures like Senator Grothman.

After 10 reelection bids without a challenger from 1980 through the 1998 cycle, Petri easily defeated John Moder in the 2000 GOP primary with 86.8 percent of the vote.

Five more cycles passed without a Republican challenger until Laura Stephens in 2012. Petri won that primary with 82.2 percent.

Representative Petri has won reelection by an average of 55.3 points during this 30+-year span.

The Marinette-born congressman got his start in the chamber by first defeating six GOP opponents in a February 1979 primary to fill the vacancy caused by the death of Republican William Steiger.

Petri won that primary with 35.3 percent of the vote – defeating then State Representative Tommy Thompson in second place by 16.5 points and then narrowly beating Democrat Gary Goyke by 0.8 points that April.

Only one challenger has come within single digits of defeating Petri ever since (Peggy Lautenschlager, losing by 5.8 points in 1992) and only two others have lost by less than 25 points (Gary Goyke in a 1980 rematch by 18.6 points and Joe Kallas in 2012 by 24.3 points).

Overall, Petri currently has the fourth longest tenure in the U.S. House of the 181 men and women to serve in the chamber in Badger State history at 35 years and 3 days through Sunday, April 6th.

Sensenbrenner will pass Cooper for second place by the end of this term.

It is not without precedent for long-serving members of Wisconsin’s U.S. House delegation to lose their party’s nomination.

A total of 18 Wisconsinites have been elected to the U.S. House for 10 or more terms since statehood.

Of these 18, four lost their party’s nomination to end their runs in Congress:

Will Petri become the fifth? Not likely.

The congressman had nearly $1 million cash in hand for his reelection campaign through the end of 2013.

Candidates have until June 2nd to file in the Badger State. The primary will be held on August 12th.