Sebelius could become the first woman to serve as governor, U.S. Senator, and cabinet head, and just the ninth individual to do so during the last 100+ years 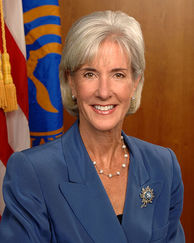 News spread quickly Wednesday when reports emerged that resigning Health and Human Services Secretary Kathleen Sebelius was contemplating a U.S. Senate run this cycle for the seat held by three-term Republican Pat Roberts in her home state of Kansas.

Sebelius would seemingly have long odds for such a campaign, despite governing the deep red state from 2003 until 2009 when she entered President Obama’s cabinet.

As detailed in a Smart Politics report from a year ago, Kansas has the longest Democratic U.S. Senate drought in the nation at 82 years with George McGill the last Democrat to win a seat in the Sunflower State in 1932.

Add to that the recent high-profile drubbing Sebelius took during the rocky launch of the Affordable Care Act, and it is no wonder that some individuals close to Sebelius are skeptical she will launch such a campaign.

But while the odds may be long, the payout would be huge.

Not only would a Sebelius victory reverse a trend more than three-quarters of a century in the making, but she would accomplish a very rare feat in American politics.

A Smart Politics study finds that not only could Kathleen Sebelius become the first woman ever to serve as governor, cabinet head, and U.S. Senator, but she could become just the ninth person to serve in all three offices during the last 100+ years.

When then Governor Sebelius resigned to become Secretary of HHS in late April 2009 she became just the second woman in U.S. history to serve as governor and hold a cabinet post.

Arizona Democrat Janet Napolitano beat Sebelius to the punch when she became Secretary of Homeland Security some 97 days prior in January 2009.

Two additional women have served in the U.S. Senate and as cabinet secretaries: Elizabeth Dole (as Secretary of Transportation under Ronald Reagan and of Labor under George H.W. Bush) and Hillary Clinton (as Secretary of State under Obama).

Only one woman to date has served as governor and U.S. Senator: Democrat Jeanne Shaheen of New Hampshire.

Overall, a total of 83 individuals have served as governor and as a cabinet head over the last 200+ years.

Of these 83 men and women, just 29 have also been elected or appointed to the nation’s upper legislative chamber.

Of these 29 notables, 19 first served as governor among these three offices, while 10 first served in the U.S. Senate.

Individuals who have served as governor, U.S. Senator, and cabinet head include:

Only eight of these 29 individuals, however, have held all three positions during the last century.

Two are currently serving in the U.S. Senate – Republicans Lamar Alexander of Tennessee and the retiring Mike Johanns of Nebraska.

Both followed what would be the Sebelius pathway.

In addition to James Byrnes mentioned above, the remaining political figures to serve in all three political offices since the turn of the 20th Century are:

Each of the last five individuals to accomplish this trifecta – Ribicoff, Alexander, Ashcroft, Johanns, and Kempthorne – all served more than one term as governor, just like Sebelius.

With her five years as Secretary of HHS, Sebelius has recorded a longer tenure as cabinet head than all but five of the 29 individuals who have served in each of these three political offices:

Kansas has a filing deadline for major party candidates of June 2nd.

Senator Roberts is being challenged to the right by Milton Wolf in the Republican primary.

29 Politicians to Serve as Governor, U.S. Senator, and Cabinet Head

Table compiled by Smart Politics with data culled from the National Governors Association.