This cycle finds the Mount Rushmore State equaling historical marks for the most U.S. Senate candidates qualifying for the ballot as well as the most Republicans (or candidates from any party) in a primary race 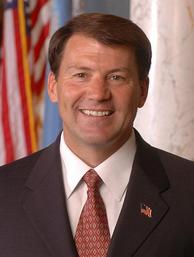 In a follow-up to last Friday’s report which highlighted the unusually high number of candidates who will appear on the 2014 South Dakota U.S. Senate general election ballot, this post details how the packed field has already tied a few state records this cycle.

Five Republicans also appeared on the primary ballot 42 years ago in 1972 in a race that turned out much more competitive than analysts are expecting for the GOP this June.

During that cycle, Republicans were fighting to fill the seat of the ailing and retiring four-term Senator Karl Mundt, who had held the seat since 1949.

None of the candidates reached the required 35 percent mark, but Hirsch received the GOP nomination at the State Convention.

Hirsch and the Republicans ended up losing the seat to Democrat James Abourezk by 14 points.

The 1938 and 1972 races were the only cycles in which a Republican primary victor did not record a majority of the vote.

Including the 2010 cycle, when the party failed to field a candidate, only one Democrat has faced a U.S. Senate primary opponent over the last 10 cycles since 1986 – incumbent Tim Johnson in 2002, winning 94 percent in a blow-out contest over Herman Eilers.

· Two Republicans: A high-profile matchup between Governor William McMaster and two-term incumbent Senator Thomas Sterling ended with McMaster winning the primary by 16.6 points (as well as the general election that November).

· One Farmer-Laborite: State Chairman Tom Ayres. (Note: Mark Bates also appeared on the Farmer-Labor line in some counties. The South Dakota Supreme Court eventually ruled a candidate could not appear more than once in a primary race for the same office, but some counties had already printed their ballots with Bates’ name double-listed. Bates lost both primaries.)

The nine candidates running in 1932 featured:

· Three Democrats: U.S.G. Cherry won his third nomination for the chamber in 12 years by narrowly defeating Lewis Bicknell of Britton by 4.5 points (42.6 percent to 38.1 percent) with former State Senator Mark Sheafe of Watertown well behind at 19.3 percent.

Across the 35 popular vote South Dakota U.S. Senate election cycles since 1914, a total of 146 candidates have appeared on the primary or general election ballots: 67 Republicans, 53 Democrats, and 26 independents and third party candidates.