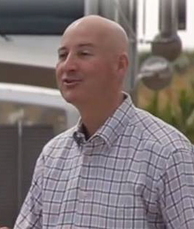 In third place was State Senator Beau McCoy with 20.9 percent while Nebraska Auditor Mike Foley was fourth with 19.3 percent.

But the GOP field was not simply competitive this cycle. The race was historically tight from first through fourth.

A Smart Politics review of Nebraska election data finds that Pete Ricketts was victorious Tuesday with the lowest percentage of the vote on record in a Nebraska Republican gubernatorial primary and by the third narrowest victory margin.

There have been a total of 38 gubernatorial primary elections in Nebraska since 1916.

(Note: Nebraska was an early adopter of the direct primary, holding its first contest in a gubernatorial race in 1908. However, the Secretary of State’s office does not have election records for Nebraska’s first four primaries through 1914. The data below is based on the 38 subsequent elections beginning in 1916).

Prior to 2014, the low water mark for a primary win in a GOP gubernatorial race in Nebraska was 32.5 percent – recorded by incumbent Samuel McKelvie during the Election of 1920.

Ricketts was shy of that mark by six percentage points Tuesday, with just a shade over a quarter of the electorate casting its ballots for him.

Each of these races had five or six candidate fields and all but McKelvie lost in the general election.

Before Tuesday’s race, the winning candidate in the previous 37 gubernatorial primaries recorded an average of 60.1 percent, or more than double Ricketts’ tally.

While the close race and low winning percentage by Ricketts can be attributed in part to the large field, the six candidates on the GOP ballot in 2014 is not a record in the Cornhusker State.

Republican voters have had the choice of eight gubernatorial candidates twice before – during the primaries of 1946 (won by Val Peterson over Arthur Weaver) and 1986 (with Kay Orr beating Kermit Brashear).

Seven candidates appeared on the Republican ballot in 1954 in a race won by Victor Anderson and six Republicans also ran for their party’s gubernatorial nomination in three other cycles: 1932 (won by Dwight Griswold), 1940 (Griswold), and 1960 (John Cooper).

One thing all of these primaries with a half-dozen or more candidates in the race had in common: there was no Republican incumbent in the mix.

Overall, an average of 4.1 candidates have run for the Republican gubernatorial nomination in Nebraska since 1916.

A divided GOP electorate is not uncommon in Nebraska at the primary phase of the campaign.

In fact, more than one-third of Republican gubernatorial nominees emerged from the primary with a plurality of the vote.

Out of the 38 such contests since 1916, a total of 14 victors were crowned as their party’s nominee without majority support:

Receiving a lack of majority support in the primary did not hurt most of these Republican nominees.

Eight of the 13 plurality primary victors won the subsequent general election, or 61.5 percent.

That’s higher than the 54.2 percent (13 of 24) of Republicans who were victorious in the general election after winning the primary with a majority of the vote.

Ricketts’ 1.0-point win over Bruning was nearly the most closely-decided Republican gubernatorial primary in state history.

One has to go back 92 years to the Election of 1922 to find a more narrowly-decided election.

One other race for the GOP nod was decided by less than one point – in 1916, when Abraham Sutton defeated future Governor Samuel McKelvie by 0.8 points – 32.7 percent to 31.9 percent.

Just six other races were decided by single digits:

The strength of the third and fourth place candidates – Beau McCoy and Mike Foley – also set some records Tuesday.

This cycle’s primary election was the first time four candidates received more than 15 percent of the vote in a GOP gubernatorial primary.

The previous best for a fourth place candidate was 14.5 percent by Dwain Williams in the 1960 election won by John Cooper. Foley earned 19.2 percent of the vote Tuesday.

Moreover, the 5.5-point difference between first and third place candidates in 2014 was the slimmest margin in party history with no other race seeing a difference in single digits.

Only three other previous races saw less than a 20-point difference between first and third place:

The 7.3-point difference between Ricketts and Foley in fourth was also a record for the party.

Ricketts will now be a favorite to hold the open seat for the Republicans in the general election where he will square off against Democratic nominee Chuck Hassebrook and Libertarian Mark Elworth.

Table compiled by Smart Politics from data culled from the Nebraska State Canvassing Board and Secretary of State.