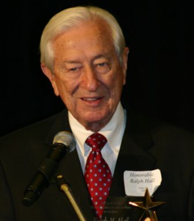 Hall was defeated in the runoff by John Ratcliffe, who won with approximately 53 percent of the vote.

Only one other sitting Texas Republican U.S. Representative in history has ever lost his party’s nomination – although technically it was not a renomination bid.

In 1996, Democrat-turned-Republican Congressman Greg Laughlin lost the GOP nomination in a runoff against Ron Paul.

However, Laughlin was never nominated as a Republican in the first instance – elected to Congress for each of his four terms as a Democrat and then switching his affiliation to the GOP in 1995.

Laughlin thus did not seek a “re”-nomination bid in 1996, but instead his first Republican Party nod.

Ralph Hall thus becomes the only sitting Republican U.S. House member from Texas to unsuccessfully seek renomination to his or her seat out of 257 attempts since statehood.

Twenty-four of the 52 Republicans from Texas to serve in the chamber are members of the state’s current delegation.

In addition to Hall, Steve Stockman will also not be back in January 2015 after his failed primary challenge to Republican U.S. Senator John Cornyn in March.

Of the remaining Republicans who previously exited the chamber:

· One lost a general election while simultaneously winning a seat via special election: Shelley Sekula-Gibbs (2006-2007)

· One switched parties and then lost the Republican nomination: Greg Laughlin (1989-1997)

With his victory Tuesday, Ratcliffe becomes the 17th second-place primary finisher in a Texas Republican U.S. House race to come back and win the runoff election since 1992.

Democrats did not field a candidate in the 4th CD race this cycle so Ratcliffe will be opposed only by Libertarian nominee J.P. Raley.

* Gibbs won a special election and lost the general election the same day so was never an incumbent U.S. Representative seeking renomination. ** Laughlin switched from the Democratic to Republican parties in the middle of his fourth term and thus had never received a Republican nomination to his seat. Table compiled by Smart Politics.