In one out of every three cycles for the past century the Wolverine State has split its vote for governor and U.S. Senator 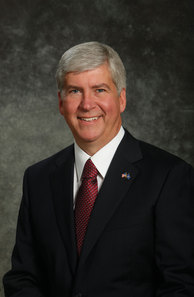 With just a shade over five months until Election Day, the status quo seems to be holding in two big contests in Michigan this cycle.

In the race for governor, Republican incumbent Rick Snyder remains the favorite against Democrat Mark Schaeur – polling ahead of the former U.S. Representative in every non-partisan poll conducted over the past year.

In recent weeks, polling seems to indicate the gap could even be growing between the GOP advantage in the governor’s race and the Democratic tilt in the U.S. Senate contest.

If this momentum holds, Michigan will split its ticket in the state’s two highest profile races this November.

But how unusual would this be?

Smart Politics examined the 25 election cycles during which Michigan held gubernatorial and U.S. Senate contests over the last 100 years and found that the electorate split its vote between the two offices approximately one-third of the time.

During this century-long period, Michiganders have voted candidates into office from the same party in both races 17 times, or 68 percent of the time.

That leaves eight cycles in which the electorate split its gubernatorial and U.S. Senate vote, or 32 percent of the time.

Five of these cycles found the state electing a Republican governor and a Democrat to the U.S. Senate, including four of the last nine cycles in which both offices were on the ballot:

In three cycles Michigan elected a Democratic governor and a Republican U.S. Senator:

In each of these aforementioned three cycles the Wolverine State also cast its Electoral College votes for a Republican presidential nominee at the top of the ticket.

The 2014 cycle is only the fourth over the last century with an incumbent governor and open-seat U.S. Senate race on the same ballot in Michigan, following 1918, 1936, and 1994.

In none of those cycles did Michiganders split their ballot in these statewide races with Republicans winning both seats in 1918 and 1994 and Democrats claiming both in 1936.

Governor Snyder’s favorable position heading into the general election is consistent with the state’s electoral history.

Overall, Michigan governors who appeared on the general election ballot have won reelection 77 percent of the time since statehood including 82 percent (23 of 28) for Republican incumbents.

The last Republican governor to lose at the ballot box was Kim Sigler in 1948.