Ernst is in a dead heat with Bruce Braley on the heels of setting the mark for the largest victory by a non-incumbent in a contested Iowa Republican U.S. Senate primary 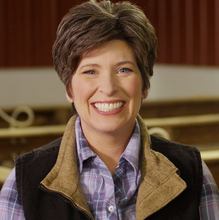 The one advantage of running unchallenged in the primary is that the nomination is in the bag.

The downside, however, is that there is little momentum to be found coming out of primary night.

While Ernst was the universal favorite to place first in the GOP primary, there was not universal agreement that she would reach the 35 percent threshold necessary to avoid sending the nomination to the state convention.

Ernst easily accomplished that feat (with 21+ percentage points to spare), and in doing so turned in one of the most impressive performances in a Republican U.S. Senate primary in Iowa history.

And now Ernst has seen the fruits of her head-turning performance with an immediate bounce in the polls – leading for the first time in head-to-head matchups against Congressman Braley in surveys conducted after her primary win.

Whether or not Ernst can sustain this bounce in the coming weeks remains to be seen, but it seems her immediate boost in the polls was borne not simply from winning the GOP primary, but doing so emphatically.

Smart Politics examined the data from Iowa U.S. Senate Republican primaries since the first contest in 1914 and found that Ernst’s 38.1-point victory was the fifth largest among the 25 contested primaries in state history – and the best by a non-incumbent.

Of the remaining 25 contests in which the nominee faced at least one opponent, only four saw a bigger blow-out than Ernst’s win Tuesday – all won by sitting U.S. Senators:

Ernst’s 38.1-point victory over Sam Clovis ranks fifth, but is the largest for any contested Republican primary not won by a sitting U.S. Senator of the 15 such contests in the party’s history.

Prior to Ernst’s win, Jim Lightfoot held the mark with his 36.7-point win over Maggie Tinsman in a three-candidate race in 1996.