At less than four terms, McCarthy has served 423 fewer days in the chamber than any floor leader in U.S. House history and almost 10 years less than the average leader 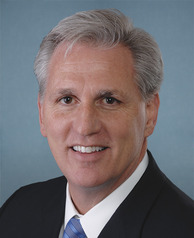 After the Republican tsunami in 2010, then North Carolina Democratic U.S. Representative Heath Shuler made a long-shot bid for Minority Leader against Nancy Pelosi, who would lose her Speakership at the convening of the 112th Congress.

At that time, Smart Politics documented how Shuler, who had just been elected to his third term at the age of 38, would have become by far the youngest and least experienced legislator among the nearly three-dozen individuals to serve in the majority or minority leadership positions since the late 1800s.

That didn’t happen, of course, as Pelosi won easily.

But while the election of California Republican and GOP Whip Kevin McCarthy by his caucus Thursday to succeed Eric Cantor as Majority Leader did not set a record for youngest floor leader in history, he did shatter the record for the least experience.

A Smart Politics study of the more than three-dozen majority and minority leaders of the U.S. House of Representatives finds that McCarthy, with less than four full terms under his belt, has the least experience of any floor leader in the chamber’s history by more than a year and nearly 10 years less than the average leader.

When Eric Cantor steps down from his leadership position at the end of July, Rep. McCarthy will become Majority Leader with just 7 years, 6 months, 29 days of service in the chamber, or 2,767 days. (Note: McCarthy did serve as Minority Leader of the California Assembly for more than two years prior to his election to Congress).

That is well less than half of the average legislative experience in the chamber for the previous three-dozen individuals to serve as floor leader since the late 1800s.

The average length of U.S. House service at the time of these 36 floor leaders’ initial election to their party’s leadership position was 6,268 days, or more than 17 years in office.

Prior to McCarthy, the low water mark for days served in the chamber was held by Acting Majority Leader Roy Blunt of Missouri.

Republicans Dick Armey of Texas and Eric Cantor of Virginia had each served 10 years before becoming Majority Leader in 1995 and 2011 respectively, or 3,652 days of service in the chamber.

When Democrat John Sharp Williams of Mississippi became Minority Leader in 1903 he had also served for 10 years.

The member of Congress who paid the most dues before becoming a floor leader was Democrat Henry Rainey of Illinois.

Three others also had a waiting period of more than a quarter-century:

In general, Republicans have elected floor leaders with less experience than have Democrats over the decades.

The average length of service for the 20 Democrats at the time they first became floor leader was 6,843 days, or more than 18.5 years.

Meanwhile, the 17 Republican floor leaders had served an average of 5,385 days in the chamber, or approximately four fewer years.

The average age of those first elected to the positions of majority or minority leader is just shy of 55 years.

At a shade more than 49 and one-half years old, McCarthy will become the seventh youngest majority leader and ninth youngest floor leader in the chamber’s history.

The youngest member to be elected majority or minority leader was North Carolina Democrat Claude Kitchin who became majority leader in 1915 at the age of 45.

Before McCarthy, seven other representatives were elected to these leadership posts before the age of 50:

Twenty other leaders were elected when in their 50s, seven more in their 60s, and one (Henry Rainey of Illinois) at the age of 70.