After Tuesday’s sweep, Kansas U.S. Representatives have now won 102 of 103 renomination bids since the 1964 cycle 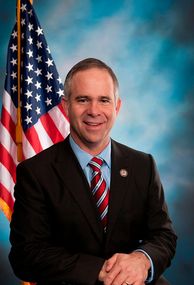 Although a few Kansas U.S. Representatives were sweating it out down the home stretch of the primary campaign, Tuesday’s elections saw all four Republican incumbents move ahead to November.

One incumbent, two-term GOPer Kevin Yoder in the 3rd CD, ran unopposed for his party’s nomination while another, three-term Republican Lynn Jenkins, cruised with just south of 70 percent of the vote in the 2nd CD against Joshua Tucker.

In the 4th CD, the money spent by two-term incumbent Mike Pompeo worked to easily fend off a late challenge by the underfunded former eight-term congressman Todd Tiahrt, to the tune of a 25-point victory.

And, in the most-watched U.S. House primary in the state Tuesday, two-term Republican Tim Huelskamp (pictured at top) survived a challenge from political newcomer Alan LaPolice in the 1st CD by 9.9 points.

All told, the status quo prevailed once again – and that’s exactly how it’s been in congressional primaries for both parties for nearly every cycle in Kansas for the last half century.

A Smart Politics review of Kansas primary election data finds that, with a clean sweep Tuesday, incumbent U.S. Representatives from the Sunflower State have now won 102 of 103 renomination bids over the last 50 years.

Since 1964, the only member of the Kansas U.S. House delegation who lost his or her party’s nomination was Republican Dick Nichols in 1992.

Nichols was a freshman from the 5th Congressional District, which was eliminated after reapportionment that cycle.

Nichols chose to run in the state’s 4th CD to take on eight-term Democrat Dan Glickman, but was upended before he got the chance in a competitive three-candidate GOP primary.

Eric Yost won the nomination with 45.1 percent of the vote with Nichols at 33.6 percent and Richard LaMunyon with 21.3 percent.

In all other 102 instances, sitting U.S. House members from Kansas have prevailed in their renomination bids since 1964.

Overall, 15 of the state’s 117 U.S. Representatives since statehood eventually lost their party’s nomination, although just six during the last 104 years.

Freshman William Brown was the first to lose his party’s nomination in 1876 – a fate that would befall eight other Kansas congressmen over the next 34 years:

Within the last century, it has become less common to see sitting U.S. Representatives fail to pick up a renomination win, although it has happened to a few with long tenures on the Hill:

None of the 25 Democrats elected to serve in the U.S. House from Kansas ever lost their party’s nomination.

However, all but five of them were eventually defeated in the general election.

Only William Carpenter, Dennis Moore, George Neeley, Bill Roy, and James Slattery exited the chamber on their own terms. (Note: Neeley and Roy launched unsuccessful U.S. Senate bids in 1914 and 1974 respectively and Slattery lost a gubernatorial campaign in 1994).

Winning their party’s nomination for another cycle keeps the hope alive that one of these four current U.S. Representatives may be the next U.S. Senator from Kansas in the coming years.