Neil Abercrombie is the first Hawaii governor to lose a renomination bid while Brian Schatz avoided becoming the first Aloha State U.S. Senator to do so 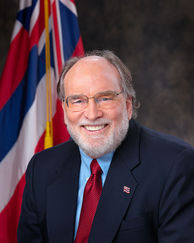 One-term Hawaii governor Neil Abercrombie made headlines a little over a week ago not by losing to State Senator David Ige as all polls suggested he would, but failing to win even half the support of his opponent.

The 31.4 percent won by Abercrombie was less than half of the vote carried by Ige (67.5 percent) in the three-candidate field.

While that is abysmally low, it is not the worst primary performance in recent years by a sitting governor: in 2006, Alaska Republican Frank Murkowski mustered just 19.1 percent of the primary vote in a five-candidate field won by Sarah Palin.

Abercrombie is the only governor seeking reelection to lose his or her renomination bid so far this cycle and the first Democratic governor to lose a primary since Bruce Sundllin of Rhode Island lost to Myrth York in 1994.

Overall, Abercrombie is the 26th sitting governor of either party to lose a renomination bid over the last 50 years.

In the much more suspenseful Democratic U.S. Senate primary, it took an extra week to make incumbent Brian Schatz the official winner, by 0.7 points.

Schatz edged Congresswoman Colleen Hanabusa by less than 1,800 votes in one of the most-watched primaries of the cycle to date.

Hawaii is one of just eight states in which U.S. Senators seeking reelection have never lost their party’s nomination along with Kentucky, Massachusetts, New Mexico, Rhode Island, Vermont, Washington, and Wyoming.