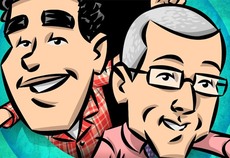 On the popular Adam and Dr. Drew Podcast Thursday, author/actor/independent filmmaker/patent troll fighter Adam Carolla and HLN host Dr. Drew Pinsky made perhaps the most explicit admissions of their political leanings to date.

Carolla has arguably left the biggest footprint in the burgeoning medium of podcasting – hosting the most listened to daily podcast, The Adam Carolla Show, as well as three others including one with Pinsky, his former Loveline co-host of 10 years, on which the two frequently discuss political and ideological issues.

Pinsky has increasingly mentioned his dissatisfaction with governmental overreach over the past year – something Carolla has famously ranted about for two decades, particularly when it comes to issues like transportation (left turn arrows), regulations (building codes), and law enforcement (police bilking law-abiding citizens with nitpicky tickets instead of catching violent criminals).

The conversation on libertarianism began with Carolla defending his record on gay rights, explaining how he has advocated for and heaped praise on the gay community as much as anyone over the last 15 years, although, admittedly, also telling jokes at their expense.

Carolla says, despite his track record, he nonetheless has a bad reputation with the gay community and explained why:

Carolla has long had a reputation for being “right wing” in the eyes of his critics – though that reputation is perhaps due more to the fact that he does not filter his podcasts, books, and stage performances with the typical Hollywood political correctness and less that he is actually a staunch conservative. (This lack of a filter coupled with his improvisational form of comedy are also why he is wildly popular and has amassed a large, loyal following).

Dr. Drew: “Are you really on the right, or are you a libertarian?”

Carolla: “Well, I’m a libertarian. But I’m not on the left.”

Dr. Drew: “I think the left and right can start to get together on libertarianism a little bit. There is a unity that you can start to call for, Adam, that your philosophy will appeal to both sides if you put it under that sort of heading.”

This is not the first time Pinsky has advocated for a libertarian-esque movement against the government and two-party system.

In several podcasts over the last year, the physician has discussed the need for creating a new “Liberty Party.”

On Thursday’s program, Pinsky characterized the ever-increasing minutia for which government tries to control the behavior of Americans through laws and regulations as “weirdly tyrannical.”

And so will Carolla be the one to take up this political mantle?

The answer to that question is obvious to those who listen to his podcasts.

On the record that he does not have low self-esteem but instead no self-esteem, Carolla quickly dismissed Pinsky’s idea that he should be the champion of a new political movement:

“Nobody’s going to listen to me on any side about anything except for clear-thinking people that listen to this podcast.”

The two podcasters seem to have agreed in recent years on general libertarian principles with regard to bureaucracy and governmental overreach, though neither has ever really hinted at backing a particular political campaign.

In fact, Carolla, author of the 2014 New York Times bestseller President Me, has stated that he does not even vote.

In recent presidential election cycles, Carolla commented on how little difference there is between the two major political parties and how little one or the other can have an impact on a given individual’s life.

Carolla explains that if someone went to sleep on election night without knowing who won and then woke up a few years later, there would be no perceptive change in their life or the world in which they live that would lead them to discern whether Barack Obama or John McCain/Mitt Romney had actually won the election.

Instead, Carolla is a vehement advocate for personal responsibility, not relying on the government or political parties, in order to make real, positive changes in one’s life.