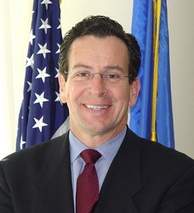 New Jersey Republican Governor Chris Christie has been making the rounds of late, not only arguing that a governor will emerge as his party’s 2016 presidential nominee but also stressing the importance of the nation’s gubernatorial elections this cycle – of which he views 11 as tossups.

That’s nearly one-third of the 36 states that hold gubernatorial elections this cycle.

Survey data seems to bear out Christie’s claim at this time, with the polling average of 10 states currently coming in with a spread of less than five percentage points and eight states at less than two points.

Through mid-day Sunday, the average polling spread for each of the 36 races at Real Clear Politics (RCP) revealed:

What’s remarkable about the 2014 cycle – should the polling averages hold – is the unusually large number of races this cycle with razor-thin polling ‘advantages’ of just fractions of a percentage point.

Add to that narrow spreads in three other races at just around 1 percentage point:

In short, each of the eight tightest gubernatorial races in the country according to RCP polling averages all involve incumbents.

What’s more, if most of these races continue to go down to the wire, the 2014 cycle might just set a modern record for the most races decided by a fraction of a percentage point.

Smart Politics examined the more than 1,600 gubernatorial elections conducted during midterm and presidential election cycles since 1900 and found that only three cycles have produced as many as five contests with a victory margin of less than one percentage point.

Overall, just 82 of the 1,661 gubernatorial races held during midterm and presidential election cycles since 1900 have been decided by less than a point, or 4.9 percent.

In other words, a larger percentage of gubernatorial races in midterm and presidential election cycles have been decided by less than five points (23.4 percent) than between 5.0 and 9.9 points (19.6 percent). 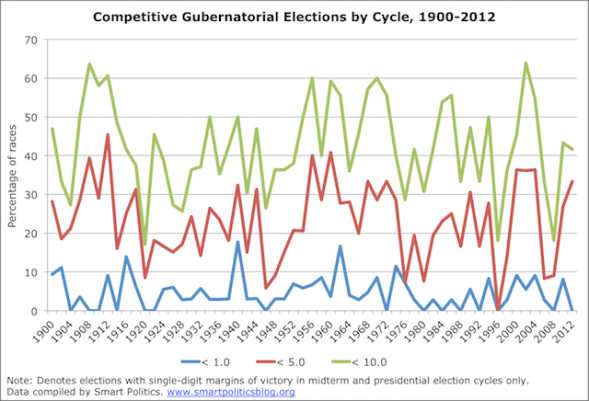 The cycle with the largest percentage of elections for governor decided by less than five points since 1900 came in 1912 with 15 of 33 (45.5 percent).

In addition to the eight governors in dead heat elections mentioned above, incumbents in Alaska (Republican Sean Parnell) and Pennsylvania (Republican Tom Corbett) are trailing in RCP averages to independent Bill Walker and Tom Wolf by 3.8 and 11.0 points respectively.

Over the last 50 years, 304 governors have won reelection while another 102 lost their party’s nomination, lost a general election, or lost a recall election, for a reelection rate of 74.9 percent during this half-century span.